I am not sure when the shift occurred maybe it was while I was recovering from cancer treatments or maybe it began way before that. Maybe it was because I read somewhere about the amount of meals a women had cooked for her family of four for 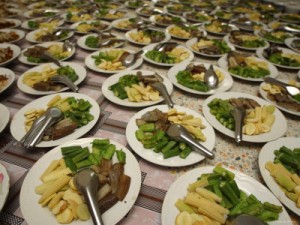 40 odd years- the number was staggering. It freaked me out – I am only 15 years in that’s 5,475 dinners alone- and for years I made three meals a day. So I have made- I don’t know – maybe like maybe 10k meals (we do eat out some) Gaa! and how many times had I made the same thing again and again? AND I had thousands of dinners to make ahead of me- thousands!!  So I was living with that happy thought in my head and at some point I became resentful that I had to cook most of the dinners night after night (at least now my kids can do their own breakfasts). All I know is that one day after I had worked all day and done a ton of laundry and a bunch of other stuff, I was in the kitchen stressing about making dinner and I watched my three teens lounging around on their phones or the computer and not offering to help- and I snapped. Silently… but my plan began.

I decided to tell my husband of the plan first because he needed to be on board and he often steps in to make or help with dinner.  Also I suspect he had picked up on my increasing disdain for cooking night after night. Maybe my hint “I hate having to make dinner every night” was the clue. Or maybe ” I just don’t feel like making dinner again- I need a break.” Was another. But after I told him my plan he was on board- as he should be if he knows whats good for him..no really he isn’t faking- he is on board.

The Plan? I am leaving the kitchen. Yep leaving.  Not everyday but I am only on duty part of the week. I will cook 3-4 nights- hubby can step in 1 or 2 (his contribution can include carry-out) so that leaves 1-3 nights a week left for my kids to fend for themselves.  I look on it as a learning opportunity for them.  When I was a kid (yep here I go) I had to learn how to at least make a small meal (hot dog, tater tots – golly day(did i just type golly day? – I did..) I loved them babies and I gained some major high school poundage from eating – no feasting- on taters with Miracle Whip (Uh Huh!). My parents went out and left me in charge one night on the weekend and I had to make dinner- we did not have delivery in 1980 where I lived anyway. So I made frozen pizzas mostly – but it was something.  In hindsight I do wish I had learned to cook more “real” meals as my step-mother was a gourmet cook- I could have learned a lot from her. And she never seemed to get resentful over cooking for us- unless we made a negative comment on her meal (once she made beef hearts and didn’t tell us until we had eaten half of it – that did not go over well.) So if my kids can learn a little cooking and cleaning while they live with us they will hopefully be a bit more prepared to be on their own – I am no gourmet cook but I can help them learn a think or two. So I look at my plan as a win win situation.

So about a week or so ago I made the announcement at dinner.  I don’t know what reaction I thought I was going to get but I must brag and say they took it quite well. I explained the plan and on the nights that I wasn’t cooking that I would have enough ingredients in the house that they could make a real meal or they could opt out and eat cereal. I encouraged each child to volunteer to cook one night – I explained how much they can learn in the kitchen by doing this and how that can positively impact their future – by the time I said all this I was being tuned out but I felt good.

How did it all turn out?  Pretty well. Two of my three kids took a night to cook last week and hubby and i covered the others. Not bad for week one. My daughter made BBQ Baked Chicken with sides(gluten free noodles and a veggie). She did not have a recipe for what to put on the chicken – so I gave her the tried and true recipe of baking chicken (these were legs btw)…take some good BBQ sauce – we like Sweet Baby Ray’s Honey – brush that on the chicken and sprinkle garlic powder on it – bake it for 35-45 mins. Tasted great!  For my son- he made meatloaf on Friday – smashed baby red potatoes and a veggie. I oversaw his meatloaf creating because I didn’t want him to touch raw meat and then touch everything else in the kitchen. (Yes my tutorials include food safety!). The meatloaf was great and we had leftovers that took us into the weekend and were gobbled up at lunch.

My other son is great at consumption of meals but not great at stepping up to cook(too immature I think) but we will see. I might suggest going forward that he assist one of us when we prepare our meals…if we don’t kill him in the process. All in all I think week one went well. Sadly because of the long weekend I did not make a plan for who is cooking this week and I have a meatloaf son home sick today (so we don’t want him anywhere near our food now).  So I have tonight and the rest of the week in a mystery! Oh well cereal is good too. And all my kids can make eggs in some form – so they will not starve!

I found that it was not cooking I was so sick of it was just doing it alone every day that was getting on my nerves. When I had to help the kids it was fun and I kind of liked that they saw me as the expert ( I am no kitchen expert but I play the part well!). It was fun chatting with them while we prepared the meal together. My daughter did hers more independently but we still conversed..  It was better then seeing the tops of their heads as they gazed into some phone or laptop. They were very proud when their meal was served (we still try to eat together most evenings) and we praised them for their efforts in stepping up and in their culinary skills. It was a win win – But then I realized that the cook doesn’t have to clean up after dinner (a rule we instilled  a few years ago)—which meant someone else had to clean up-crud- I think I am even more resentful of cleaning up dishes…I may feel another mutiny coming on:)