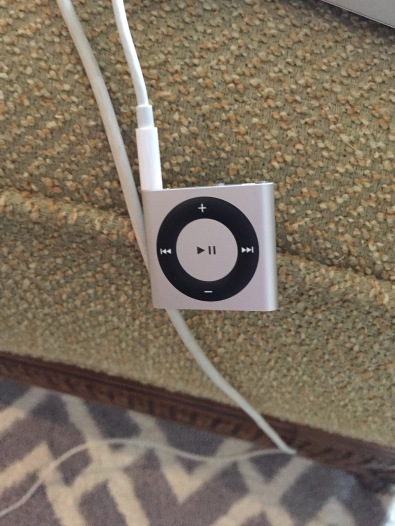 Ozzy got his iPod Shuffle back. I use the word “back” loosely as we got him the shuffle about 2 years ago and quickly realized that he was not capable of keeping the tiny thing safe. It would have been lost in like a half day. So we confiscated it.  But Ozzy, who has an incredible memory, recently reminded me that I had his iPod Shuffle and he would like to have it. So his dad and I decided that he could earn back the iPod. That would turn out to be a difficult task.

I kept setting goals for the return of it and he was unable to meet the goals. We went a couple weeks and the goals I set were not met. I really wanted him to get the iPod back but to also to know he earned it. I knew by trial and error that I was not setting realistic goals for Ozzy and I had to make it easier. So I set a very manageable goal -get up on time and on the bus two days in a row. He had been missing the bus and also almost missing the bus for a couple weeks and I had had it. So I told him if I had to drive him to school anymore it will cost him $5. But I also told him that I knew he could get up on time and I knew the iPod would be a worthy prize. He was in.

For two days he did it! Got his rear end up and off to school. Maybe with a little bit of father prodding but he was much easier to manage. Wouldn’t you know the second day he got up and out on time I got a note from a teacher letting me know Ozzy had not handed in some work that he had told me he had done. Sigh. Ok he did meet his goals by getting up and out the door so I told him after he got all the work completed (the teacher gave him an extension- for less points) that the iPod was his. He worked and worked and worked some more. I was rooting for him and told him if he got it completed I was buying him 2 songs of his choice. And finally Sunday night it was complete!

Ozzy got his iPod back! I bought him three songs (bc I wanted him to see how worth it good behavior is) and also let him sync some of my music to his iPod. (he likes classic rock- good taste, my man). I told him that in the future I will buy him songs but he won’t know what I am rewarding for until I tell him I’m buying him a song. It could be for his room being pretty neat, or getting up on time, or for not taking peoples things, or for handing in homework on-time etc. Great incentive for improved behavior(I hope). He also knows he will lose the iPod if he commits a biggie infraction like stealing the laptop or others electronics.

I have already bought him a song. Today it was for getting up early yesterday. This morning he didn’t do too well with the getting up -but I want to reinforce the good things he does. Now we are working on an audiobook. He has been very compliant and excited and up the last few days. So I’m happy for him.

I have a suspicion that he will tire of earning songs or the iPod will fill up. So I’m going to have to have a plan for when that happens. But for now I’m going to enjoy his happiness (and compliance!).

I also want to express my thanks to his English teacher who teaches outside the box. They are reading Beowulf and his teacher loves comics. He had the students do a comic panel based on archetypes from the book. Not only does Ozzy love to read, he loves comics. But I wasn’t sure he would like the assignment bc he isn’t into drawing.

I came home from an appointment today to find him very into his comic panels. He spent a lot of time on a few of them and I worried about how much time this could take him. And it was due tomorrow. Well some of the panels are more detailed than the others but overall he did well. But best of all he enjoyed the task and was engaged in it. So I have encouraged him to continue to make comics. We can get him a pad and some new colored pencils. He seemed up for that.  All of these endeavors encourage Ozzy and pull him out of his patterns of repeated negative behavior as he has other things to focus on and he’s getting positive reinforcement.

I know he’s going to mess up. He’s Ozzy and I’ve known him a long time. And he’s a teen(who is about 10 on the maturity scale- not my calculation but the therapists). He’s supposed to mess up. I am just stoked that maybe we are seeing him begin to grasp that positive behavior gets you good stuff. Just a small bit of growth but it’s the repetition that will finally get things to stick in his head. I’m not going to tell you that I learned my lessons fast. I wasn’t an easy teen. So I get it may take years. Ozzy has challenges and can be a challenge. We are doing the best we can. Sometimes my husband and I just go out to regroup. I’ve found that it helps me to get away from the teens once a week! A brain reset!

I am so pleased with Ozzy. And I’ve just realized my next goal related prize. I mentioned comics above -and as I was typing this I remembered that there is a brand new comic book store in town! Comic books=Ozzy rewards. Yay!

Ozzy’s comics. He was very proud of them and I am proud of him.(and yes his handwriting is awful! So is mine). 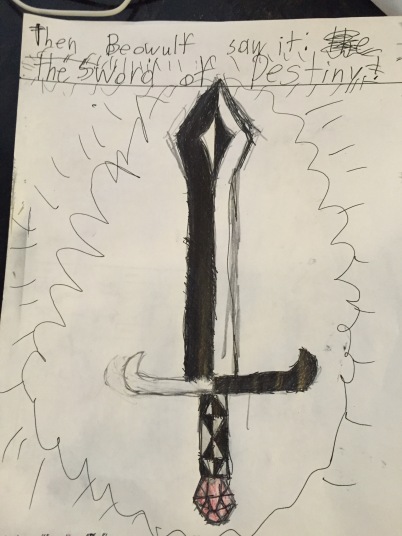 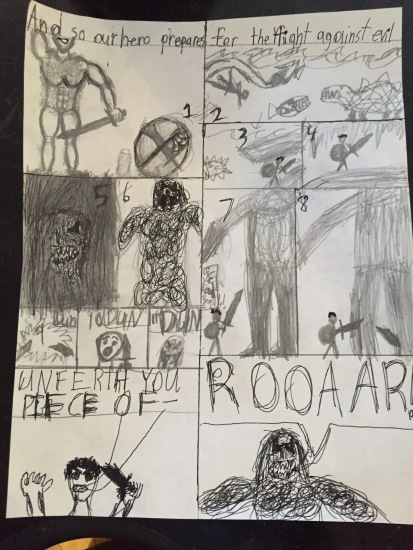 I hold out promise for his creativity:) The top guy is pretty good- it took him a while but practice makes perfect. Cool teacher to have them do this task.