There we were- all 5 of us- sitting around the table on Saturday night at a favorite restaurant in our small town- all of us had been running all day. Kevin and I running kids around to their various activities. K worked, L had a band concert that we attended (which went over 2 hours) and Ozzy was volunteering at a robotics competition at our local community college.  We were run out to say the least and here we were together at that table and guess what? No electronics were present. This was not by request either. It was uncanny- and I struggled not to check my own phone while waiting for the food. My daughter was chatty, L was laughing and joking his face could be seen as it wasn’t bent to look into his phone(he is rather cute), Ozzy was tired from being at robotics all day but was in a good mood.

My Hubby’s artwork- isn’t he sweet?

The table had a chalkboard and everyone was drawing on it. We were like an old time  family. You might remember- the kind before cell phones came to rule our lives. It was pretty cool.  We laughed and ate and laughed some more- nobody argued which is a big deal when you have three teen siblings sitting in the same place. I looked around at other tables. A group of tween girls sat close by…no phones in their hands either. They sat and laughed with each other.  I began to wonder if we were in an alter universe for just a short time. I was not going to say a thing at all because that would have broken the spell. I did not want to break the spell.

You see we needed that moment. Everyone needs those moments. With three teens who have various activities and one with special needs you can get exhausted and irritable. Inevitably once my kids come home their noses are in their homework, phones, or xbox, or in a book(Ozzy still goes phoneless) we become dis-connected. We need time to re-connect – and we really needed it that day. 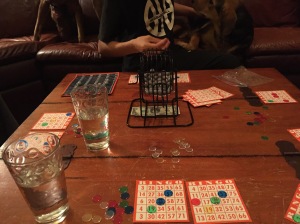 Maybe this nirvana began on Friday night when I asked if anyone wanted to play a game. Not a video game- a real board game. Ozzy is always up for a board game. God love him. I suggested Bingo. Ozzy ran to set it up. Up from his lair came L, and hubby was up for it too. There was a no show -my daughter K- but she was not feeling well so better to let her rest. (Don’t wake the beast – aka cranky 16 yr old girl). So began some rousing rounds of Bingo. Money was donated by hubby and winners took all. We decided we enjoyed that so much that we would play next time like they do at the fair -you pay 25 cents a card. I had a bag of coins from a wallet clean out so I was ready.

So maybe the magic carried into Saturday night as we sat around the restaurant table actually liking each other. When we left I was kind of bummed because I figured we would all (including me) go back to our electronics. But the magic continued – we decided to drive through a nearby neighborhood full of nice homes in search of pretty Christmas light displays. Surprisingly this hood didn’t have much in the way of fabulous displays as one might expect and of course this was reason for some good spirited jokes and laughter. We were all laughing..still. At some point L began discussing what a W.A.S.P. was – he had learned the term in history. His concept was so off that we were in hysterics trying to convince him that he had it wrong. You had to be there but I am sure you have had these moments too. They are special. They occur less and less with teens who are too busy, too egocentric, and are beginning to look for their own independence that it isn’t cool to hang with the folks.  I hadn’t planned for this to happen- this feeling of old time familyishness(made up word). It just happened. We all enjoyed being together..and the night did not even end when we pulled into our driveway..I thought it might. Someone mentioned Bingo – and I figured nobody would be up for it so I went into my room to change. A knock on the door brought Ozzy telling me that they were all waiting for me to begin Bingo (ALL!– including K). I was tired as heck but I wasn’t missing the game- I grabbed my baggie of change and headed out to continue the very cool night with my family… I wish these rare but special nights to you and yours. We parents know how something this simple can warm our hearts.

(and hubby and I were the big winners at Bingo! I am thinking game nights should be more common in our house – I like winning money!)