Ozzy wrote this sonnet as part of his Honors English class this week. He has a very low grade in this class and we are hoping his final exam and this sonnet might help his grade. Ozzy is gifted in language Arts. His grade in this class, and in most of his classes , are not representative of his ability. We know many factors play into this. Some if it is boredom, some maturity, some a result of his inability to focus and organize. English was hard – he had many assignments. Some he just didn’t do. Some he did partially. As a parent sometimes we can help in every way we can think of but in the end they have to want it more than we do. It’s their life after all.

I’ve exhausted myself trying to help him this first half of ninth grade. Now we are done. At times I felt like I was back in school. I have two other high schoolers to help too. I helped write an essay on Imagery last week for my son L. (“We” got a 90). Pretty good -but It is a lot sometimes.

Ozzy starts an entire new set of classes next week. We have teacher agreement for the next half of the year to have them assist me in helping him get homework handed in. I don’t know if this will happen. In honors classes there is an expectation and the workload is harder. Teachers aren’t accustomed to having to “hold a kids hand” in these classes. But they said they would work with Ozzy and me so I am crossing my fingers. We could put him in regular academic level classes where the workload is less but the feeling is he will then be too bored. I agree with that.

Sometimes I ask myself do I stop working so hard if he doesn’t really seem to care? He would rather be in robotics 24/7. There would be a lot less arguments, angry outbursts and much less strife for me if I just didn’t help him. But I can’t walk away bc I can see what he can’t. I can see the future and his potential. So I dance the dance because I can’t walk away. I can’t pretend not to care. My tactic is to work with him calmly and reward him when he gets things done. Sometimes it goes well and other times it doesn’t. This week it went pretty well. It was a big final exam week and for some reason there was a sonnet due in English. (His teacher is pretty hard ). I kept it positive and encouraged him to get something written. If he could get an idea going he would run with it. Ozzy is a very good writer and I’m finding he’s a pretty good poet too. He got it done! He handed it in!

His sonnet is below. It’s pretty great in this moms opinion. I might have made my last two lines a little different but I think this sonnet shows great creativity. I have no idea if this will pull up his grade but I find it a victory that he got it done and handed in. That’s an A in my book.

The ones at the bottom want for the top,
And the ones at the top kick their lessers;
But those who stayed away, they laugh and scoff.
For they alone can see the true message.
The endless struggle is all that they know,
They are ensnared in their beastly desire,
But when fed the beasts appetite just grows :
Like a greedy all consuming fire.
To kill the fire you must make it starve,
you must not play anyone else’s game.
For why climb a hill and be left with scars,
when walking around would be all the same?
So take the easy way through life,
or go your own way and do what you like.
—–
The Sonnet in its original form. (His handwriting is terrible-I know) 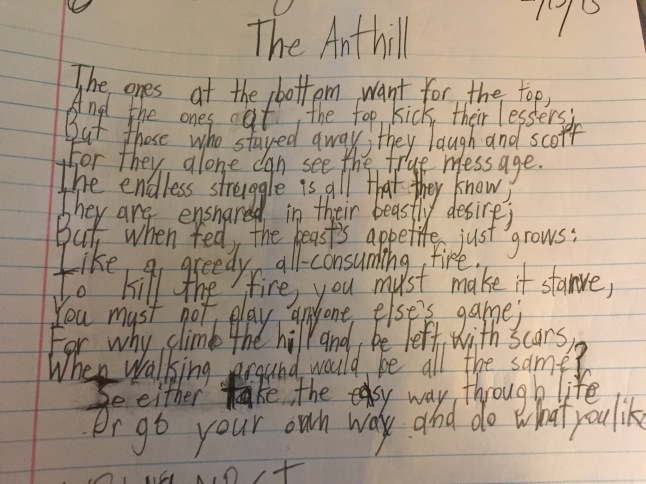