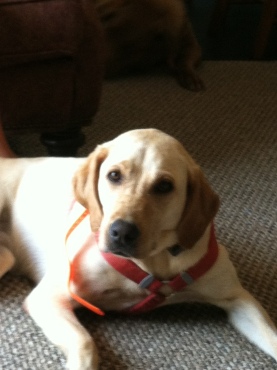 We left our last post about Lemon with a to be continued...the post just got too long! So we were discussing Lemon and the fact that she can turn her on a dime with other dogs. This has become and issue. Since my first post she has attacked Reese again the only remnants on him were the vinegar water I sprayed on them to break it up. No spit or blood. But what does this mean? I will give some of the history of her antics…Read on….

Lemon can play very well with other dogs but we have had our fair share of her fighting with our other dogs as well. It kind of comes out of nowhere but it’s not always a tussle that goes anywhere it’s more of a warning. But then we have the other times.  The other times have me wondering about her. Thankfully these other times have not drawn blood but they are continuos and mean. I know there is something to them -something she senses. Maybe she has a sixth sense. I will explain: When Lemon was a puppy we had a greyhound Libby. Libby never liked Lemon.  She did her best to ignore her and wouldn’t engage in play. Most often she bared her teeth at Lemon- and Lemon who exhibits (still) this odd submission behavior would crawl across the floor practically curling over herself trying to get Libby to like her. But it didn’t work and it was always the aloof Libby and loudmouth Lemon living separately in peace. Until one day.  It may have begun before we moved here to our farm I can’t quite recall but Lemon went after Libby. It was a lot of barking in her face and Libby tried to ignore it. But that just made it worse. When we moved here Lemon decided it was ok to go at Libby in this way and the more Libby ignored the more Lemon came at her. Eventually Lemon was biting at Libby’s sides and I began to see a chink in Libby’s armor. She was scared.  We reprimanded Lemon. Used all the tactics I knew of and some others suggested. I knew a big fight would be terrible for my greyhound. Greyhounds rip open so easily. I have had five and lived through a lot of suturing from various accidents.  I was not letting that happen. So Libby began living in our bedroom. We knew she was happy there. An old greyhound and a comfy bed. That worked for her. We developed a way to make it so they rarely interacted. It was a pain but we got used to it. One day, Libby went outside alone and when I went to let her in she was standing at the bottom of our deck stairs and she had a very swollen leg. I knew it was broken. And it was. After a misdiagnosis by our vet and guilt trips about how we should fix the break and  as we refuse thousand of dollars in surgery( we have since changed vets) we found out from a different vet (now or current vet!) that Libby had Osteosarcoma (bone cancer) in her leg.  I had seen it before in another greyhound I had -why hadn’t I suspected it?  So it was a matter of time before Libby would be leaving us.

Shortly after that Lemon began to get after our big Chessie mix Riley. She began the same stuff. Barking and lunging at him. She would sometimes bite at his neck but upon inspection there was no wetness. Almost like she was nuzzling him. They had been thick as thieves since she was a puppy. Riley was way bigger then she was and I wasn’t as fearful she’d hurt him but he was slowing down some so I watched. Over months she would growl at him and jump in his face. She sometimes would watch him or sniff him as he went by. I corrected her and she’d stop for a while. But she’d begin again. Then Riley really slowed down and one day he wouldn’t eat. We went to the vet. Tumor on the spleen. We said goodbye to him right there. Libby had died five months prior.

I began to wonder if Lemon wasn’t sensing the tumors in them. Or sensing something. We also lost another old dog during that time. Coach fell to old age mostly and Lemon never tried her antics with him. So it wasn’t the weak being forced out of the pack -and I had my OES Dave then too who was 15. He did have a spleen tumor at the very end and she only avoided him. She never went for him. So my theory of a tumor sniffing dog didn’t hold true 100% of the time. Then I got cAncer and I don’t recall her acting odd with me. She certainly wasn’t aggressive. She didn’t sniff me in any weird way. So I kind of tabled the idea that she might be sensing an illness. The old dogs had all passed away and we had two new dogs she seemed to like. Until she didn’t.

Over the last few weeks she has been doing the same odd barking and lunging at and even scuffing with Reese our pit/viszla mix. He is a sweet goofy one yr old guy. He thinks she playing. But I can tell she’s not. They have gotten into a tussle and though there’s not even spit on him after the fact, I think she means some kind of business. He has fought back some. I was hoping they’d work it out if I didn’t intervene but I’ve had to break it up a couple time when it seemed to be escalating.

I have watched her and I’ve watched Reese. I am not seeing any provocation or body language by Reese that should invite this aggressive behavior. Today I noticed him being very cautious near her.  She’s odd. She will lick his mouth one minute and later in the day she might become aggressive with him. She seems to do this more when humans are around. I’ve seen them outdoors together and she’s fine with him. This is much like it was with Libby.

Is  Reese sick you might wonder?  Well, he has had a number of bouts of vomiting but he eats a lot of poop. He had a bad bout of it a few weeks ago and the vet gave him antibiotics. We almost had them X-ray to see if there was any shadows of concern on the film. He is thin but we feed him well. Many of my young dogs stay thin and then pick up weight around age 2.  Ask Lemon she is a fatty now and I couldn’t keep weight in her a couple years ago. We didn’t get the X-ray even though we told the vet about Lemons odd behaviors in the past. She didn’t think it was needed. Reese is acting fine. But Lemon who used to play and play with him doesn’t seem to like him anymore. I’ve seen my dogs posture and change buddies. But it is often silent. Pierce and Rudy have had their issues where they ignored each other for a while. Then Pierce might try to be dominant with Rudy and eventually they silently worked out their differences and they play like fools now. These dances continue all the time in a pack but Lemons actions towards Reese have me wondering. Does she have a sixth sense? Is she just a dominant dog? I will keep watching the dynamics and see. We sometimes think maybe she’s just a bully and maybe she should be in a home without other dogs. But that’s not what I see entirely. She is bossy but there’s more to this than a bully dog. Plus we love her. We met her when she was 3 weeks old. We don’t want to lose her. We just want her to behave.

We don’t always know what is going on in a dog’s mind. We can observe and if you know some about body language of a dog you can read some things. But we never really know what is going on for sure. So I don’t know why Lemon behaves this way. Is she just a bully? Does she smell or sense illness- specifically tumors? I have read about the use of dogs to detect cancers. Is that what is happening? I guess I wont know until we know if Reese has something really wrong. And we aren’t jumping into testing – we don’t have the money to test a dog that acts healthy.

Lemon has always been one to keep us on our toes. She is one of those dogs who can rattle a pack – and her humans. So that’s the short (long) story of our Lemon. Bully or Psychic? She is a pain sometimes..a lot…but we love her.