What is a four mile challenge?  This challenge is simple. Take your camera and drive four miles then stop and take a picture of what is there. The challenge was tossed out by fellow blogger Glen Curtis. (Must read this blog..photography and food). Today after working and getting  in a funk about my touchy laptop and then not having the correct paper in the printer and more -I decided I needed to get out of the house and go take some pictures.

There was a time not long ago that I could not have made this trek. My anxiety disorder aka monkey on my back- has plagued me since I got my first panic attack at age 14. I have spent a lot of years with that monkey and have learned a lot about

anxiety. One thing I learned when I developed a driving phobia about 5 or 6 years ago was that anxiety will show up in different ways. You conquer one phobia or thing that makes you anxious and the monkey pops itself someplace else. I am much better now but at one point I can remember going out to drive alone and my legs were just shaking and shaking. It was hard to drive and perhaps I should not have been doing so. But I was determined to beat the fear. On that trek which was just in a large circle near my kids school I hit traffic and was stuck in a line waiting for some construction to move. I remember breathing and trying not to freak out. It was awful but I didn’t freak out and I kept driving. Battle won.

I often took one of my dogs with me so I felt less alone. If I got nervous I called someone and chatted on the speaker phone. Eventually I broke free of the driving fear – mostly. But its not all the way gone. I still have anxiety if I need to drive far from home. The definition of far for me might be 20 miles one day.. 10 the next- it changes. Though over the summer I drove pretty far north to take my daughter to field hockey.

When I had cancer much of my anxiety (yes I have it with other things too) was somewhat gone. I guess facing a serious illness in reality didn’t cause panic like it might for some “normal” people. The monkey didn’t know what to do with a real thing. I was already scared as crap and determined to face what came my way. It is the unknown non-real things that the monkey whispers in my ear that drag me down. Now post cancer treatments and being cancer free I find that old monkey jumping on my back over different things. He whispers to me at night. Tries to make me feel less than and he tries to make me feel afraid of things that aren’t there or I cannot control . I hate that freaking monkey. Sometimes he wins but much of the time he loses. 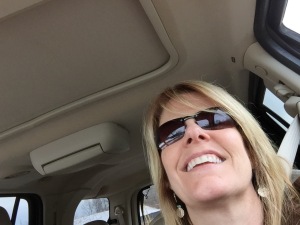 When I read about the 4 mile challenge I thought I want to try this. So I got my gear ready to go. I decided to drive in a direction I was least comfortable with. North. Rudy and I jumped into the car. I felt some anxiety but I ignored it. Once in the car and on the road I was feeling pretty darn good. I had the trip odometer set and was kind of hoping at the 4 mile mark I would see something cool. I hoped it was this hardscape business up that way- it always has piles of rocks that are neat.  But it wasn’t that place – it was a house. I drove past

it and kept driving. I was realizing I picked a bad road to stop on…a major north/south thoroughfare that runs from Germantown MD all the way to PA. And it was getting close to rush hour. There was a lot of traffic. I drove on and finally found a place to stop and turn around. I had driven well past the four mile mark and I was feeling good. On the way back I thought I would stop and take a picture of the house at mile 4 but I had seen a kid get off a bus and head into the house and I felt creepy stopping to take a picture…so I did a drive by with my cell phone. 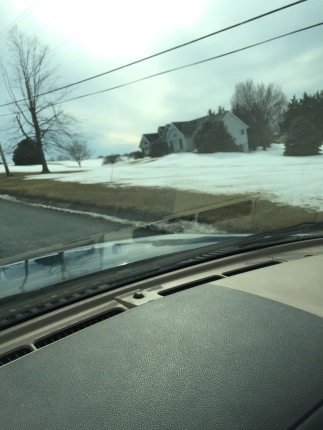 MILE 4 – More dashboard than anything but the house is the gray one in the photo.Cell phone drive by. 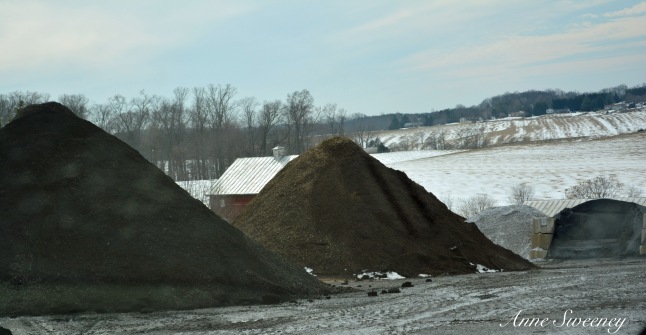 The gravel mounds I had hoped would be at the 4 mile mark. 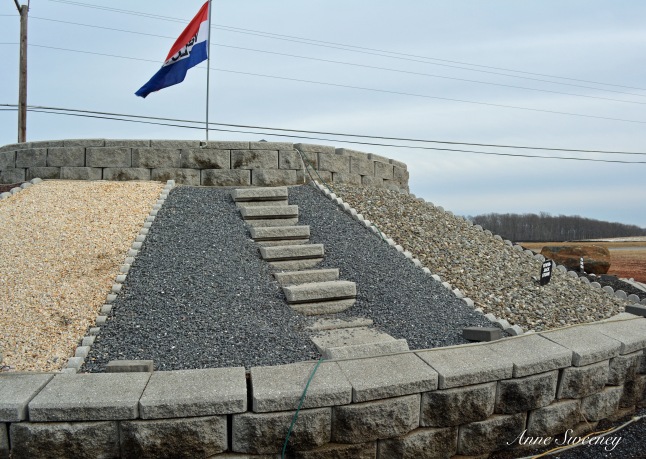 I went on my way and decided to go back south to the 2 mile mark and turn east and go 2 miles and take a picture there. The math was off a but I did slow down at the second mile 4 and took a shot. Then I just decided to drive around and hopefully find pictures of good stuff. For me good stuff is mostly farms. I love the country. I was riding around and saying to Rudy that I wonder how I will live at the crowded beach in a few years(bc I need the beach). I will miss the open space. If somehow we could get the best of both worlds–beach/country– I would be so lucky!

I must be honest this might have been the photo at the second mile 4 but I really have forgotten!

I found that on this drive I could not really exit the car. Every inch of side road was soaking and I feared making tracks on the grass of someones property or sliding into a gully. So I simply was able to stop in the middle of the road and take my pictures out the windows. Rudy thought it was funny and he wanted to help me on a few occasions. We veered off onto a road I had not travelled before and I found a number of farms along that route to photograph. The day was pretty cloudy and the light flat but I managed to grab a few decent shots.

I over exposed the silo in PS – I liked it like that. Geez I made my name huge on this photo!

I think at one point Rudy was worried we might be lost- he began whining- it was close to chow time- and he is very serious about chow time. I assured him I knew where we were going. I had no idea where we were but I have good navigation skills and of course I had GPS if I got really turned around. Anyone who lives in the country knows that roads wind around through a valley and you can get pretty turned around and of course if a country road is any country road it has to change names right in the middle. I was on Arthur Shipley and I saw a sign that said it went to the right – like a right turn- but I thought the sign was wrong – that it was turned or something. But sure enough by staying on Arthur Shipley and not turning right at the sign that said Arthur Shipley I ended up on Bushey road. “Good to know.” -I said to myself.  Bushey Road led me back to a main road I knew well and I assured Rudy we could go home for chow. He was pretty stoked about that.

This farm was so awesome- all white buildings with no green scape yet. The pond still defrosting. I might go take another shot in the spring.

Once home I realized that I didn’t really do the four mile challenge I think it may have been the 4, 8,10,11,14 mile challenge. But as I am learning in life it really is about the journey not the destination..and I also realized that that son of a gun of a monkey had stayed home.

I really like the barn but not the photo as much.

One thought on “….the 4 mile challenge…take that monkey….”