When I walked down to the barn last Saturday and then again on Sunday I was greeted by a sight that I hadn’t seen in over 2 years. (read about Sheldon’s return here) Our barn cat -Sheldon -sitting on the patio that leads to the gym part of our barn. I almost have to pinch myself because I couldn’t believe it was real. Sheldon was back and it felt like he had never left. But he had been gone over two years.
My husband had told me he felt like he went back in time. He can’t believe this cat is back. He’s doing all the things he did before. He follows us around while we pick up manure. He lounges on the barn patio and he hunts in our back pasture.  I don’t always know where he is. He has his elusive hiding places as does our other cat Mango. You 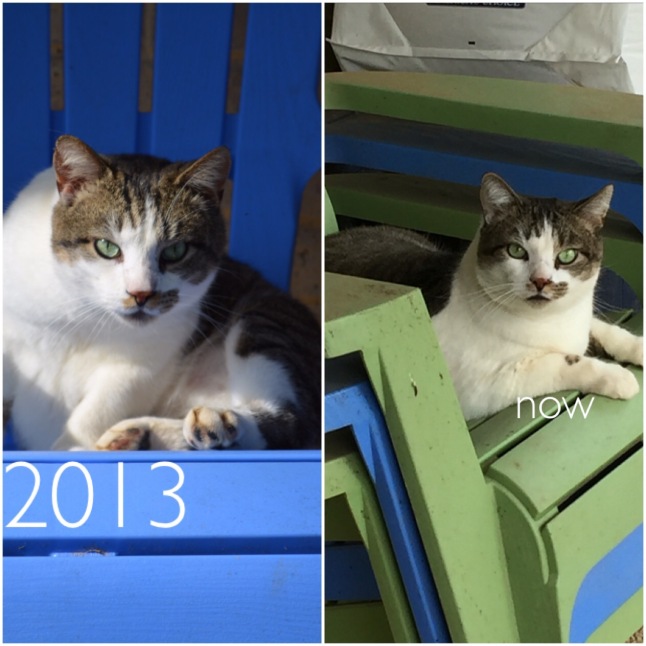 don’t find them unless they want to be found. But he’s around a lot now maybe it’s BC I’m taking the time to really notice him this time around.

I forgot what a cool cat he is. My husband found him as a kitten running around at a Shell gas station in the fall of 2010. He had two dogs in the car as we were just completing our move to our small farm. He called me and told me he found a kitten-did I want it. I didn’t. I was in the midst of a horrible move. I wouldn’t be ready for a barn cat for a while -if ever. I’m very allergic to cats so I wasn’t so sure.( I’m very allergic to hay too. Yes I picked a farm to live on. You can’t let a little allergy stop your dreams! )So did I want the kitten? No! But Kevin had asked around and even went to some homes near the station -nobody claimed the kitten. He could have left it there but my mind flew back to the family of feral cats we had a few years back in our old neighborhood and the number I had seen dead on the roads. (Nobody would come trap them). And the road that the Shell station was on was so busy. The kitten had little chance of survival. I couldn’t let that kitten go once it was with my husband. Nothing ever goes according for to my plan anyway-  so yes bring it home I told him. How he got two dogs (who hadn’t  ever been around a cat) and a kitten and a child home all in our smaller car I have no idea. I think it involved a kitten hidden inside a shirt or jacket and some crazed sniffing dogs. Someone may have been clawed up a bit.

The kitten arrived home and we named her Shell of course. I had examined the kitten and decided it was a female. Shell had a nice ring to it for a girl cat. Shell acclimated in our barn garage (now our gym) for a couple weeks and then she(he)  was let free to hopefully kill some mice. At about four months I realized her meow seemed more deep. Hmm …and after a quick check (pardon me) I realized I had made a mistake she was a he. Ok quick name update to Sheldon!

Sheldon was our lone cat until I decided to adopt a couple feral cats -a mom (momma) and her daughter -a tiny kitten we named Mango. They lived rather amicably for a while. Momma was our mouser and Sheldon seemed to like birds. We lost momma to a virus after Sheldon left – I wonder if he even remembers she was there.

When he left a couple years ago and didn’t return we really lost hope after a few months that we would ever see him again. We figured he was next door at the neighbor that he had run off to before. But after a year or more went by in wasn’t so sure. It’s clear someone had taken him in and I’m really glad he looked so well -ok very fat but very well.  It’s clear to me now that he is very happy hanging out with us for the time being.

When he returned  the other day it was surreal and it still is. I think Kevin and I figured he was dead so this is such a cool experience seeing him again. We did decide if someone puts flyers out we will answer them. We will explain his story. It’s quite amazing.  He’s really as much our cat as he is whoever fed him all this time. Well as much as barn cats are ours anyway. I feel like they choose us.

We joke maybe this is a spa vacation for him. Time to shed some of the massive weight he gained wherever he was before. Perhaps as the weather gets colder he might pack up and go back to what I have now imagined to be a warm window sill with great views of birds. I hope he doesn’t though.  I didn’t  realize how much I missed him until he came back.  It’s a gift to get to be with him and I find myself appreciating him each day he is here. I tell him each day how happy I am he’s here and how I hope he’ll stay. I make sure I pet him in case it would be the last time. If  he does leave I won’t take it personally but I’ll be sad and I’ll always hope he’ll return. But for now I’ll enjoy the time and I won’t take it for granted.

Funny how the beings in our lives can teach us so much -human or animal. Sheldons return made me realize we don’t often get second chances with those we love and we best make sure we really see them each day -acknowledge them- and give thanks for their precense in our lives. Tell them we love them. Because one day they may not be there. Thank you chunky,sweet, barn cat for returning and opening my eyes and heart. I hope you stay but if you don’t that’s ok because you gave me a gift of a second chance that I won’t squander.