On Sunday, we took two of our three teens –my daughter and one of my sons- to Casey Hospice House in Rockville, MD to say goodbye to their grandfather -my father-in-law. We pulled up to a well-manicured building that looked pretty new. I could see in the summer the grounds would be quite beautiful.

I had given my three children – my boys, age 15, and my daughter, age 17, the choice of going to see him or to stay home. It’s a personal choice and I told them it was ok whatever they chose. Two of them felt like they wanted to say goodbye. One of my sons didn’t feel like he could handle seeing his grandfather. I could tell that he was anxious about it and I told him it was ok that whatever he decided was the right choice for him and there was no pressure for him to go.

It’s one of those things you don’t want your kids to have to face but I also know death is as much a part of life as living is. If they felt ready to see it then I was ok with that.

I don’t do well with death. I have lost a number of people in my life and it has never gotten easier but I have learned that the more I open myself to feeling the sadness and grief instead of running from it the more I am able to face it.

We had been losing Dad for a number of years to Alzheimer’s.  His condition has gotten much worse over the last 6 months. He is now in what is called late-stage Alzheimer’s. Last week he lost the ability to walk, eat on his own, and communicate clearly. He didn’t know his home anymore and became agitated and would try to ask if someone could take him home.

Dad and my mother-in-law have been being cared for at home by my brother-in -law who made their care his full time job 3 years ago. He gets relief from 2 other brothers regularly and the rest of us try to pitch in when we can. It has been a blessing that he has been able to be home for so long. Recently in home hospice care had also started at their primary doctors recommendation so they had a number of nurses, aides, and social workers coming in as well.

With six sons it has been possible for Dad to have home care until this past week when he took the big turn downward and the social worker that visited them a couple times a week recommended he go to a hospice house to be evaluated to see if he should be moved to a nursing facility or if he could go back home with 24 hour nursing care. Sadly, in hospice he began declining and it looks like he will be leaving us soon.

This was my first time in a hospice house and I was nervous wondering what it might be like.  Would my kids be freaked out? Would I? But I found the place comforting and warm. There was a big fireplace and sitting area. There were quite a few people sitting on comfortable looking couches by the fire. The staff was very nice and before we went into the room they updated Kevin on his fathers condition. She said he was declining but couldn’t give a timeframe of when he might pass.

We walked into a nice private room with a lounge chair and a window bench. My eyes went to the bed where the man I’ve know as Dad for 18 years lay sleeping soundly. He looked peaceful but that’s when reality hit me that he was really going to leave us soon and the tears began.

Though we had been saying goodbye to him for so long as his memory slipped away we still had his body- now we were really going to lose all of him. It is so final.  I wanted to hide my tears from my kids. But I couldn’t and I realized it was ok. Kevin and I could show our grief because that is part of life too.

I think in some ways I am relieved that he will be released from the clutches of Alzheimer’s that has taken away much of his quality of life. But the other part of me wants to keep him here because I love him so much and I am crushed by the reality that he will be physically gone. I also am so sad for my mother-in-law because she is losing the man she has been married to for 68 years.

My father-in-law was resting peacefully thanks to medication. Gone was the agitated and confused man from a few days before when he didn’t know his home was home anymore. I was glad my kids saw him like this – peaceful. I think seeing him upset would have been harder.

I leaned over and rubbed his warm shoulder and prayed for a bit and then I began talking out loud to him. I wanted my kids to feel free to speak to him if they felt like it- but they didn’t have to do anything. This was the first time they had ever been to a care facility such as this. I was worried they would be afraid. I wanted to somehow put them at ease but they were handling it ok.

We left my husband to be alone with his dad for a while. My kids and I sat together on old rocking chairs in the hallway- we cried and we talked.  I kept asking if they were ok. My son said he was shaken because he “hadn’t done anything like this before”- (saying goodbye to someone he knew that was going to die). He and my daughter both said they were glad they came to say their goodbyes but that it was very hard.

When Kevin came out of the room to get us I asked the kids if they wanted to go back in and they both said yes. I’m glad they wanted to – I think they’ll always know they got to say goodbye. I think it is closure for them.

I leaned over the man that has loved me like a daughter and whispered a few things in his ear – then I kissed his head.

I thanked him for loving me like his own child. I thanked him for raising the most wonderful son. I told him I would take care of Kevin, and I asked Dad to visit me in my dreams to let me know he is ok.

My son hugged him – tears flowing. He is my sensitive kid and I worried he would hold it all in. I’ll try to talk with him often over the next week. My heart hurts for my kid’s pain.

My daughter stood crying in the doorway – I can tell she was scared but didn’t want to be. She was faced looking into the hall and she would turn and look at Dad and then turn away and try not to cry but it wasn’t working. She’s pretty tough and I think this tug at her emotions threw her off a bit. She doesn’t like to cry but she let the tears come and I think this was good for her. It hurt me to see her so saddened but for her to let that out is a big deal.

We went to leave and my heart dropped. This may be the final goodbye. I could hardly step from the room. I kissed him again and I walked out – my heart breaking and my eyes zooming in on the exit door. I needed to get out before the dam broke.

I pushed out of the door and the sobs came. I turned around and looked at the rest of my family and realized we were all crying too. When we got back to the car we sat there for a little while trying to get it together. We were one ball of sad – but we were sad together.

I didn’t feel like going home right away and I felt like doing something happy. So we drove to see a big Christmas light display in a park not far away.

I think it lightened my kids’ mood and it did lighten mine. Kevin seemed glad for the distraction.

Sometimes the blend of sadness and happy and grief and joy that can exist in one day astounds me. They all exist at each second of the day. When we are sad and grieving we want life to stop and wait because we are so consumed with it but the world still throws some happiness and joy in there. Sometimes we experience them all in one day – it’s quite amazing.

I think Dad would have liked those lights. I remember when we all went to walk through a Christmas light display when we had just one small baby boy.  Dad picked our little son up and walked through the light displays reliving the wonder through a little boy’s eyes.

I told my kids that this is one of the hard parts of life – the part that we often want to avoid. But really this sadness is also a gift. This sadness comes because we loved someone so much. Love is a true blessing and when we feel grief it’s because we opened ourselves to connection and love.  The grief is hard  -but how great was that love. The pain is worth it. 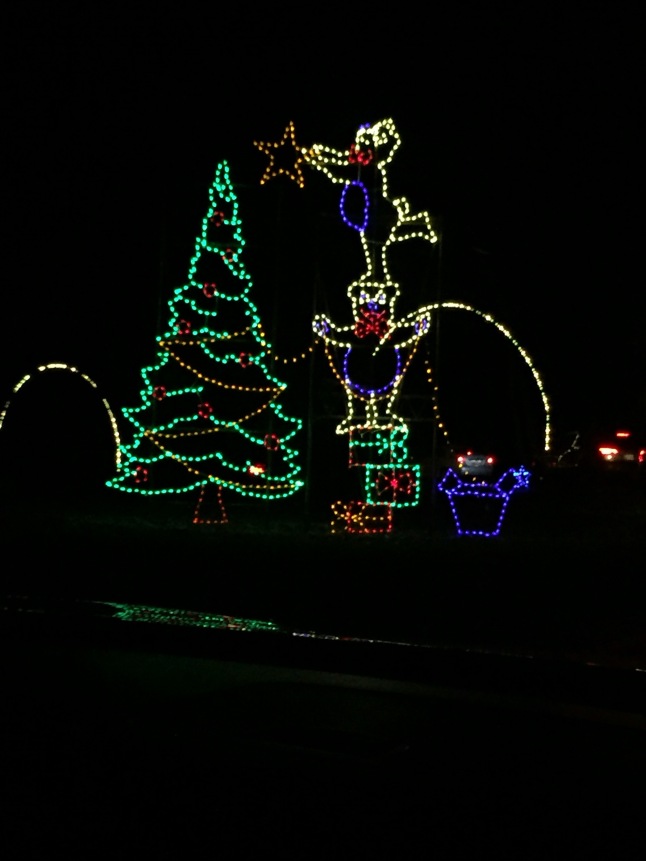 2 thoughts on “Goodbyes and love  – Ball of sad”