If you read my blog you know I am a crazy animal lover. I am especially partial or partially nuts about dogs. Dogs have been an important part of my existence ever since my childhood– they loved me unconditionally when I needed it. Dogs were and still are my solace.

I had a friend that I once used as a rescue referral that told the rescue “ If I was a dog, I would want to be a dog who lived with the Sweeney’s”. I considered that a compliment. When you are a dog at my house you are part of the family.

My pets are spoiled- pets in America today have it good. I know from the ads on TV that the pet supply industry is big business. Americans spent $56 billion on their pets last year (info on that here) and I helped build that number. I should be proud! Does everyone get gifts for their pets? Probably not, but I know many who do. I have my limits on my spoiling but I am definitely among those that love to indulge their pets from time to time with toys and other sundries.

When it came to holidays and pets I haven’t always bought them gifts for Christmas. I figured they got special treats and gifts all year long and, really, they have no idea it’s Christmas anyway. They just act excited on that day because they pick up the kid’s vibes- and mine -but it is so cute!

I know they don’t need these things. I just like to think they need these things but that’s my own issue – but I say -who cares! – they seem to like getting gifts and it makes me happy to give them stuff.

For the last two years we began to do Secret Santa for the humans in our home. I am not sure who it was (probably me) that decided it might be nice to add the dogs to the Secret Santa game. We each pick a pet name – we keep it a secret- and go and shop for something for the dog and they get it on Christmas day – they might even get a wrapped gift if their “Santa” wants to wrap it.

I can picture their faces when they get their gift. They may not know what Christmas is but they know a dog toy when they see one!

This year we almost didn’t do the Secret Santa thing for the dogs. I almost nixed it (I know – scrooge) because we each already picked a person in the family to buy a special gift for – with a $30 limit. I guess I didn’t want to stick anyone with having to buy another gift.

It turns out that my son, Luke, really wanted to do the Secret Santa – The Dog Version and he’s as cute as my dogs and has those eyes that melt my heart so we put the dog’s names in a bowl and picked the dogs names. We had quite a laugh that we were keeping this a secret from each other! Would we spill the beans to the dogs if we knew whom we each had?!

Ok so what was the limit going to be? I asked.

I felt that to be a bit excessive especially since I would essentially be the one buying the gift my son’s would be giving their dog. It’s easy to set a limit when you aren’t ponying up the cash!

I chose bandannas for my pick – Ridley – our newest dog. I have become big into dog embellishing. Not dressing up per se but I like a dog in a nice bandana or fun collar.

Ridley is one big giant fur ball(I just saw Star Wars and am thinking of renaming him Chewy) of an Old English Sheepdog and he is quite pleased wearing bandanas. The other dogs (excluding my perfect dog Rudy) think bandanas suck and they try to rip them off the dog wearing them. Rudy is also a bandana wearer and many of his have been found in the yard in shreds. Hate is ugly.

So I asked the humans in my family for purposes of this very important blog to tell me who they chose for their Secret Santa – The Dog Version – and what they got there dogs and why. I promised not to tell their chosen dog.

Luke had Lemon our witchy and super smart yellow lab – and he bought her that new yellow Frisbee. They are very close –those two—“she would have asked for that if she could speak” He said (I am so glad she can’t speak to be honest- she would not ever shut up). Lemon is quite the Frisbee dog. But she will eat the Frisbee if you leave her alone with it. I give it a week until its in shreds.

Kamilla chose Pierce our collie/shepherd mix. She got him treats because she thought, “he would enjoy them”. Yes you had him at T-R-E-A-T. He can spell. Those treats will be gone in 30 , 15, 10, 5 seconds.

Anyway – where was I? Suki – my mom’s Corgi mix. She is a little fiery spark plug and she already has a mountain -and I kid you not a mountain- of stuffed toys. When we visit my mom’s home there are always new stuffed animals – around but she has her favorites – her birthday cake, and her banana, and she has a kangaroo that has a baby in the mom’s pouch. I don’t understand that one at all – and I am wondering if my mom didn’t get that off of the Discovery Channel website and is trying to pass it off as a dog toy.

Suki isn’t a stuffy destroyer – which my dogs are – and my dog, Rudy, often goes with me to visit my mom and he has tried to de-stuff Suki’s stuffy’s many times but for such a small dog she packs a wicked snarl and Rudy has only managed to steal and gut one toy from her.

Kevin drew Suki’s name. I asked him today what he chose and why. He chose…a stuffy(another one?)… it’s an elephant. So why did Kevin choose the elephant I asked…”It was cheap- it was in the $3.99 bin” he said. Well I burst out laughing at that one. I don’t know why I was expecting a much deeper answer. It’s a dog toy- he wasn’t going to put much thought into it.

My son has Rudy our Golden and he bought Rudy a Bandana. Why I asked- “because you told me to get him that.” Well he is right I did give him that gift idea. I am excited to see what he chose for him. Rudy looks so good in bandanas!

Have I gone through all six dogs yet? Nope — I missed Reese our pit mix. Well he’s one lucky guy because my mom chose him, and Kevin also bought him a new Washington Redskins collar yesterday. Hey we are contenders this year- in a terrible division but we are in the mix so a new collar showing our support was perfect. And Reese just likes anything – well except for getting his nails clipped.

My mom- who officially chose Reese – had already gotten all the dogs gifts well before we picked names and I forgot to ask her what she got them. It didn’t occur to me until now that the gifts she bought for them would have been enough and we could have saved the money and not bought them anything else- but what fun would that be? Zero fun. I vote for fun.

Yesterday, I went out shopping for some last minute human gifts but don’t you know when I was in Home Goods. They have grown a once very small pet section into a small pet store inside their store. Wouldn’t you know that I found a huge deal on a huge orthopedic pet bed. It was way over the $10 budget we set but I had to get it for Ridley who is old and would appreciate (at least I thought he should appreciate) such a bed and maybe he wouldn’t need to sleep on the couch all the time. If it doesn’t work out for him – and it might not because he really loves couches – I think it could be a decent guest bed.

I got caught up in the fun of it and my pets deserve it because they make me happy. Giving to them makes me happy. I like happy. Lately I have needed some extra happy. They don’t have be able to pick a name to give a human a gift -they give their gift of love everyday. Well the dogs do – and the cats do sometimes when they feel like it – and my horses give some love on Mondays and Fridays only because horses are like that -and the Chickens and ducks never give us love but they give us eggs so all in all it is win/win with our little group of critters here in our farm.

PostScript: Ridley got his new bed. He looked at it, stood on it, circled around on it, sat on it, got up and went over to the couch got on it and went to sleep. I had a good giggle over that. I laughed harder when Pierce ate all his treats in a nano-second and Rudy attempted to eat the package the treats came in. Every single dollar spent was worth it- these guys make me smile everyday!

Merry Christmas to you and yours…. 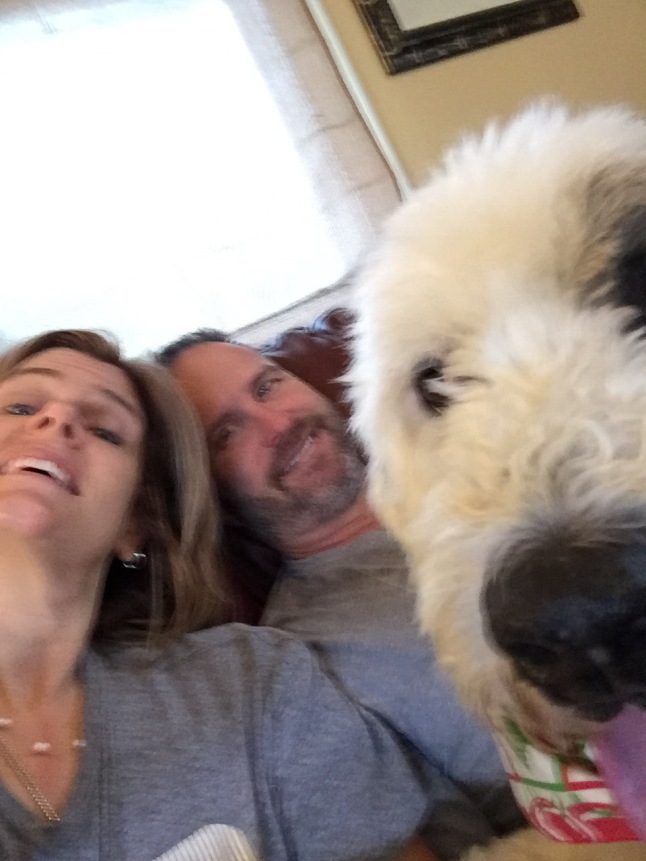 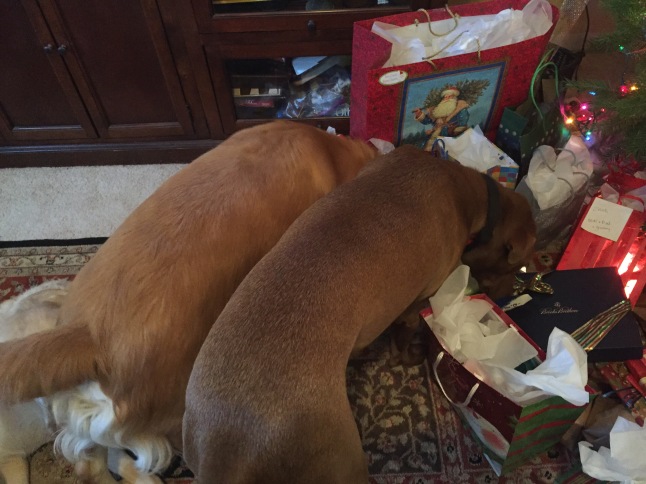 One thought on “Don’t Forget Fido!”