I’m not a party animal anymore. Yes- a long time ago I liked to have a few drinks and let loose with the best of them. But age and the hatred of feeling crummy the next day has slowed me down. Now I’m up late if it’s 10pm.

So how did I did I find myself out at a party the other night  that didn’t begin until 9pm?  Well I wa he played out in Orlando with two of my kids and Kevin my husband who is here on business. He is working the biggest fitness trade show in the US. His company hosted a VIP party last night and we got tickets. I guess because we are important(not because it was  mandatory for employees to at least show up-enjoy wink.) So I had to go right?

Well I wanted to go in theory but it was going to cut into my bedtime. So I wasn’t sure. Kevin could go alone except he doesn’t like doing the party scene alone and he really hoped I’d go.  Stick him in front of 5000 people and ask him to talk business and he’s your man. But some social situations make him quiver and he doesn’t drink to calm his nerves.

Since his precense at least for some of the evening was mandatory, I was feeling like I should go -plus it would be a reason to dress up some and I had just the dress in mind to wear. One that I bought 2 years ago and loved on me but never wore.  It was one of those dresses that could go dressy or go more casual. Perfecto.  It still had tags. It needed a debut. And I had just the shoes. I didn’t care a lick about the party but I wanted to dress up some!

Was Cinderella into going to the ball to find a guy or for the awesome ball gown? I am guessing the duds. Maybe im wrong. She is nearby- in Disney -maybe I should ask her. I’m sure she’d say the clothes.

So after a busy day walking around the trade show as hubby worked and then spent some time at the pool (so tiring laying in paradise) I was hoping to get a second wind so I could enjoy said party. After I got myself ready I was feeling pretty good. I looked ok -not as in shape as I was when I got the dress but I was looking ok and Kevin thought I looked awesome so that was the point -right?

We had the teens to contend with. Our two sons are with us here and our daughter joins us on the next leg of our trip in Marco Island.  So we took the boys to dinner. I was a little over dressed for Johhny Rockets but that place is great for the boys. And it was right near the restaurant where the party was being held. And near a movie theater where the boys would be going while we got our groove on.

Once we disposed of the boys (and I mean that in the nicest way) we strutted our stuff over to the Partay!!  I was kind of excited – which surprised me. 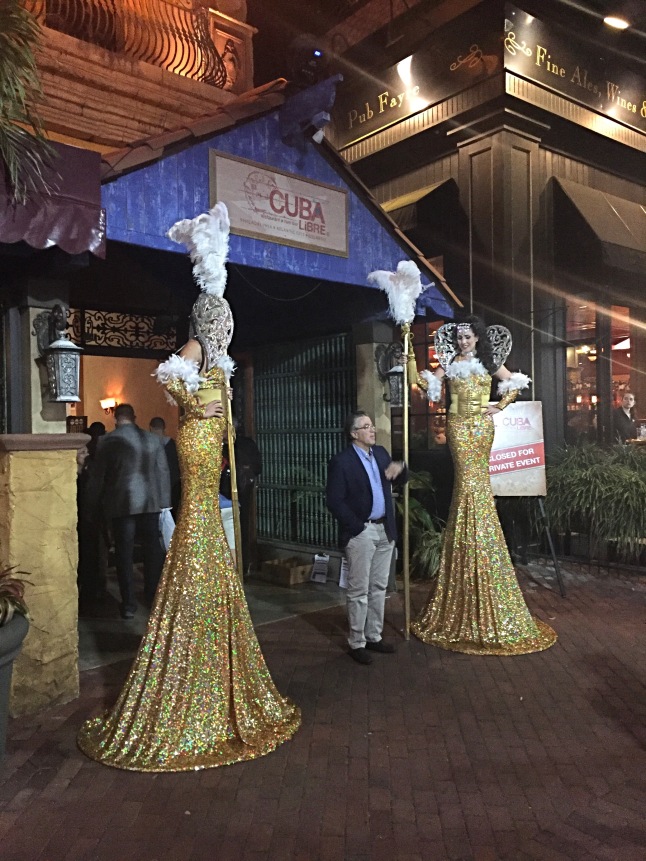 The restaurant/bar Cuba Libre was impressive. Kevin’s company pulled out all the stops. Outside they had  two women that were like ten feet tall dressed in gold sequin dresses  standing sentry at the door. They were a sight to see and many people were taking photos.   Inside the restaurant looked like a little town in Cuba. Well I haven’t been to Cuba but I’m thinking that was the effect they were trying to go for. It had beautiful dyed concrete floors and the walls were all fronts of buildings so you felt like you were out in the streets. 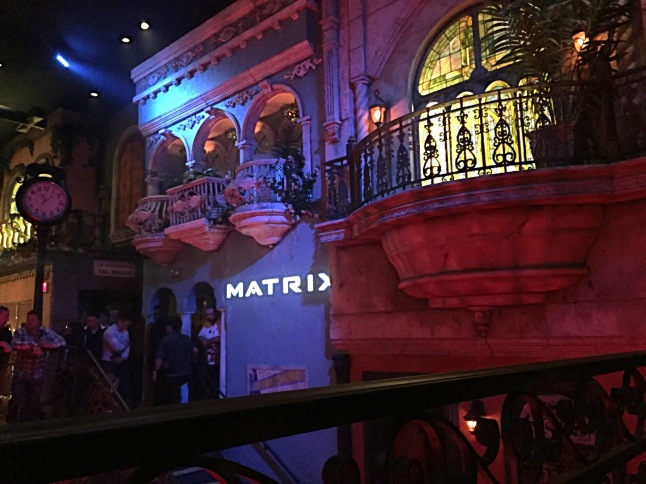 Kevin’s company had rented the entire place for the VIP party for the night. Very private and posh We got there early hoping to make the rounds and then make a quick exit. But there weren’t many people there yet so we’d have to wait a while to make our precense known.  So we may as well make the best of it I thought.

We migrated to the upper level via a very lovely and long stairway. I got a drink. I said hubby doesn’t drink. I do occasionally and usually no more than one or two. I’m a lightweight.

We began to see folks Kevin knew arrive and we said some hellos. I was kind of bored and chilly upstairs and I wanted to bail and go back to the hotel room and watch hgtv. But we pressed our way back downstairs and thats where the real action was. The dance floor was packed and the DJ played EDM (electronic dance music) which I didn’t know much about (and still don’t really) until my almost 18 year old daughter got into it. I was ways poo pooing her love of EDM and told her all the kids do at those EDM events are drugs-I’m a harpy sometimes.  And maybe that’s true but I was sort of digging the music at this event. I couldn’t do that nightly my brain would be mush from the intense bass. But I could see why my daughter might like it! Hopefully drug free.

The dancing was infectious I kind of wanted to jump in. Kevin isn’t a dancer at all and he said I should jump in the fray if I wanted to but I had only one drink in me and it was a small one. I needed more alcohol to fuel my dance legs-so I opted to stay on the edge of the floor and dance some and take photos. And it turned out that I got some kinda cool photos. 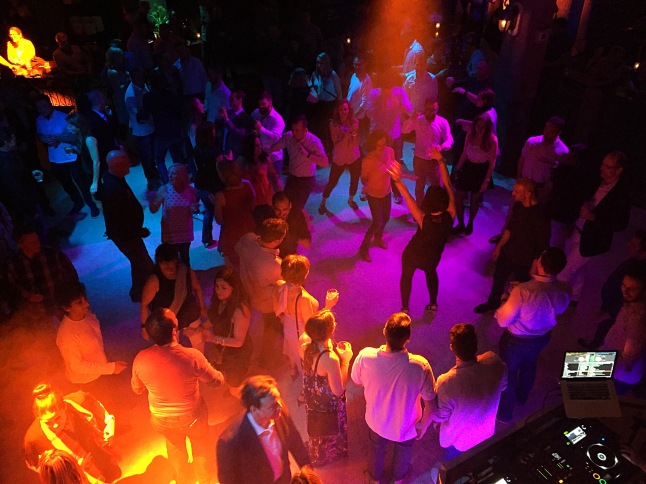 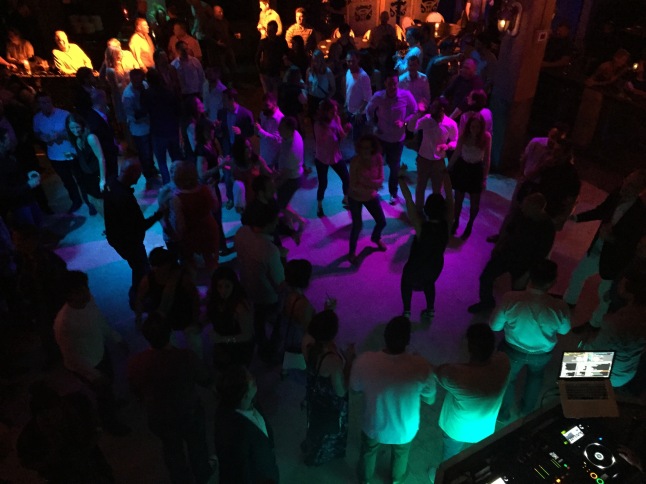 A hired photographer was walking around and taking photos of groups and we got in a photo thus cataloging our attendance at the party-(later I would photo bomb another group -it was too much right in my face not to do it – a little of the party Anne is still inside me!) So –hey -after being in an official corporate picture and a photo bomb we could go now there was proof of our attendance -except we didn’t leave. We were kind of having fun watching the dancing .  It wasn’t a place to hold any conversation so I just said hello and smiled a lot. Which was fine with me. I don’t like screaming over blaring music.

The bummer of the night for me was that the place was getting smoky – they had a cigar making bar set up outside on a terrace. (Cuban bar thing I guess). There are still smoking areas at bars in Florida -outside- but the smoke wafted inside as the doors opened and closed.  And I am super sensitive to smoke. I can’t believe I ever smoked years ago. It boggles me how I did it. But it was getting bad so we went back upstairs hoping for a respite from the pungent cigar smoke – but the smoke was up there too.

We sat for a bit watching the dancing and I felt myself getting sleepy and a little sick from the smoke . Ugh I’m so not a party girl. I needed a coffee to wake up except I don’t drink caffeine anymore. I know – I feel bad for me to!

I think Kevin was just waiting for me to say we could go so he had an excuse if anyone from work asked why he left early.

It was a good party. And the fun was in the watching I think. Though I would have danced maybe if I had another drink. Maybe.

The company tried to make it a nice night for clients with the dancing and drinks and finger foods. They even had artists doing caricatures -on iPads -my have things changed. I had to take a pictures of that. 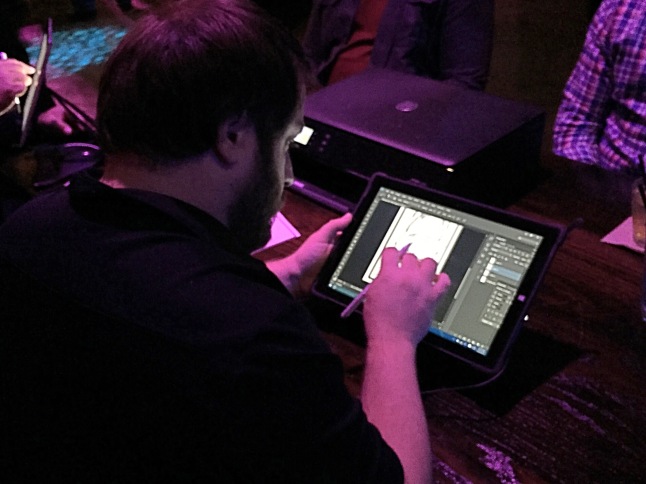 We took a turn in the photo booth they had in a corner and even donned some kooky hats – I still have our photo booth pictures from 18 years ago. Back then you didn’t see them at parties or weddings like you do now.  I wonder if any over indulged parties took photos in there later in the evening.

Alas I wouldn’t find out as the smoke forced us to have to take leave. No more watching the dancing from the floor of the balconies. We had to squeeze our way  out the door to head home.

I am not a party girl. This event was so out of my element but it was good I went. And with people of all ages dancing I didn’t feel too old. I think I’ve been feeling old lately for some reason. It was kind of fun really and we realized as we left it was after midnight.

Way past Cinderellas bedtime and mine-and I didn’t lose a slipper.

But I already had the handsome prince. 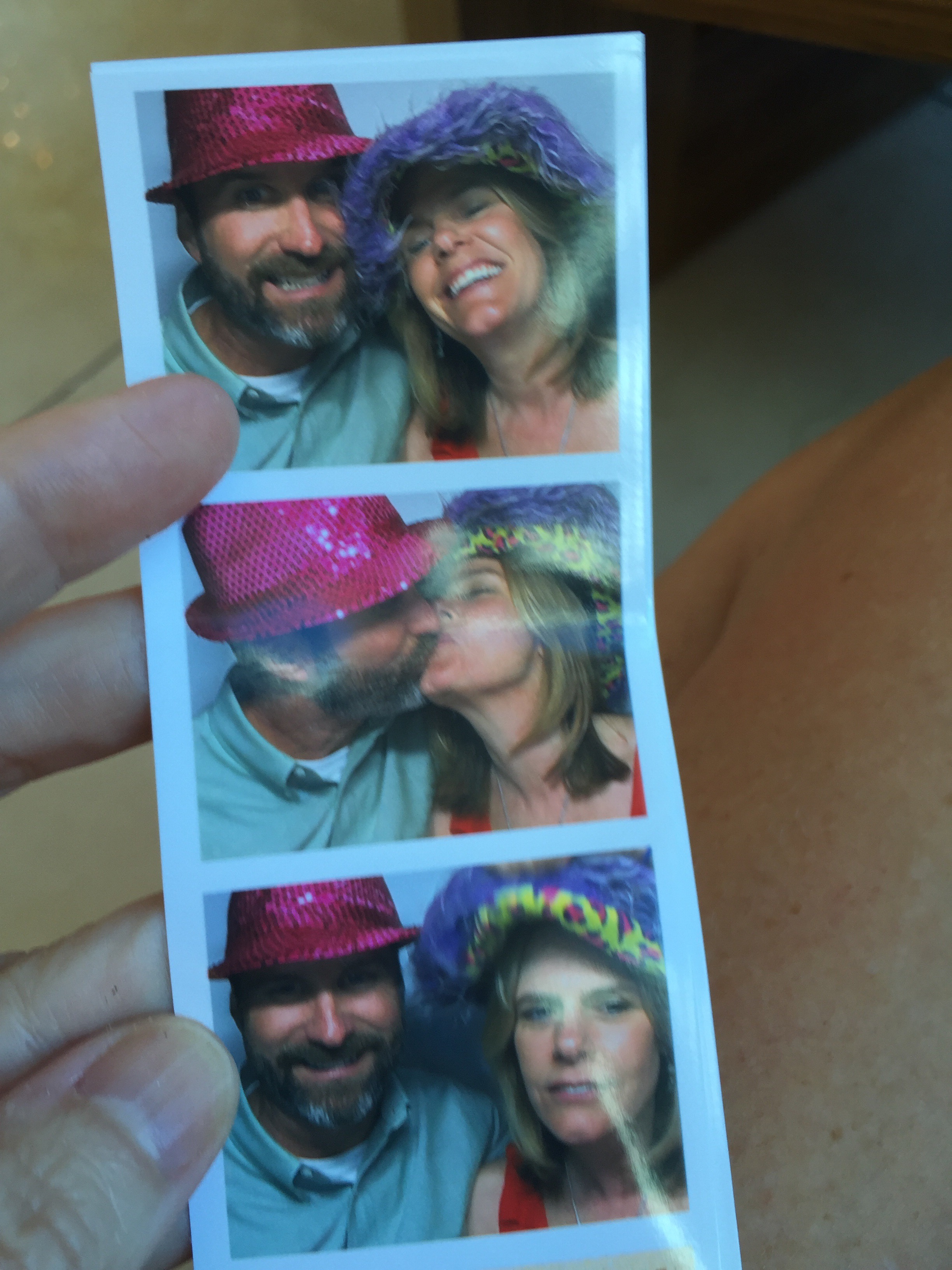 that last shot i wasnt ready for!