I think for me the best part of the airboat trip in Everglades national park was when I was on dry land. That’s not to say it wasn’t a good boat ride. I loved the slow parts where we talked about the Mangrove trees and where I was like two feet from an Alligator. That was all cool – I just am not a fan of trying to make a boat fly. I don’t like feeling as if we are out of control because we are going so fast – and I do not like doing 180s in a boat either.

I spent a lot of time trying to be brave – my glass of wine buzz that I got at lunch in preparation for a fast ride on a boat was well worn off as the wait was so long for our number to be called letting us know it was our time for our flight/ride through the Everglades.

I tried to be brave. Fast boats are not my thing and I hoped an airboat would feel different when going fast. And it does. It’s real smooth. You feel like you are gliding on top of the shiny briny water because you are -flying on top of it. It’s smooth not choppy and bumpy like a regular boat but is still freaking fast and it’s the fast – it turns out – that I dislike.

I even shot some photos while we were flying through the canals that were flanked by mangroves – I tried to just let go and enjoy.  I even once had my hands in the air like I just did not care – yay me. But I spent much of the fast parts trip tucked with my head down. When Kevin caught on that I was scared he put his arm around me. Nice man.

You can’t tell but we were going very fast here!

Turns out our guide was a lead foot and we did a lot of fast moving. Maybe BC there were only two areas that had gators out that day. Maybe he wanted to give us our money’s worth.  But we went fast!

Incoming airboat as we were heading out.

In between the going super fast part our tour guide did stop and teach us a few things about the area.

There are three types of Mangrove trees in the area – the red, the black and the white. It is illegal to cut down the mangroves and I read on the park website for Florida that if a person needs to cut back the mangroves for some reason there are many rules and approvals that one needs to get to do that. A person can be fined for cutting down mangroves willy nilly. Mangroves are part of a delicate ecosystem in the everglades so I can see why there might be regulations. The driver felt that the mangroves were overtaking the everglades – and to him it was a problem. Maybe it makes getting their boats around more difficult. Each airboat company operator only can travel in specific areas in the everglades so it is probably not uncommon that they need to cut back the trees to allow their boats to be able to get in and out.  I found the mangroves to be very interesting and beautiful. 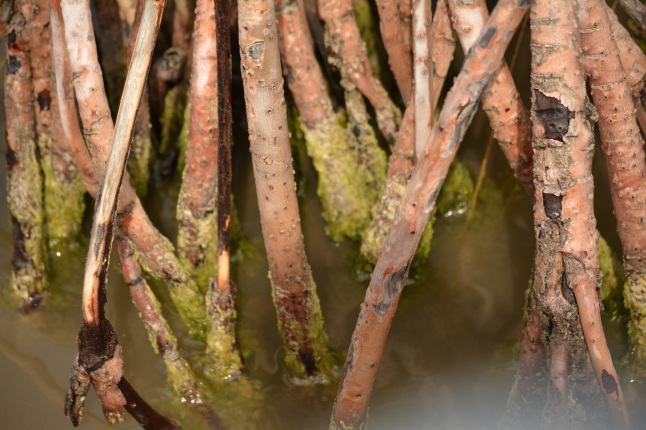 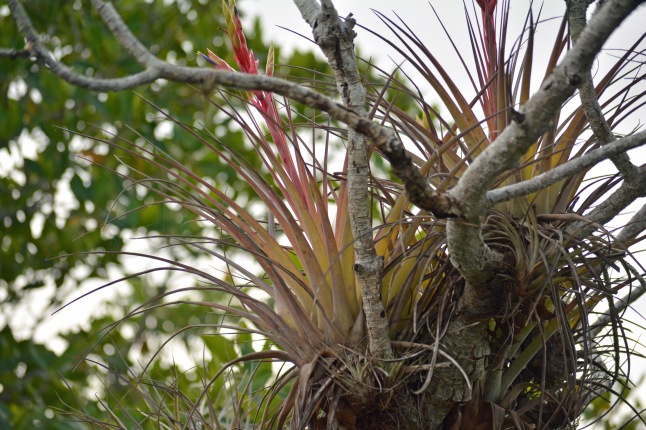 We also learned about a big problem that is messing with the delicate ecosystem in the everglades- the Burmese Python. This snake is not a natural animal in the everglades. They were put there by people who got them as pets but could no longer care for them. The python population has grown over the years in the everglades and they are eating everything in sight. They can even take on an alligator – the other big eater in the glades. The snakes pose a threat to endangered species in the everglades. I noticed a big lack of birds when we were on the tour. I was hoping to see more seabirds but there were very few. I suspect some reasons for this are the snakes who will eat the eggs (and a bird if they snag one). There are python hunts now yearly which may hopefully help slow the growth of the python population.

What I wanted to see in the wild were Gators! We were able to see two in the habitat. It is thrilling to see these prehistoric looking beings in their natural habitat.  We had seen some in the “zoo” that was attached to this tour company -but seeing them in the wild is even cooler. When we arrived to buy our tickets we also saw one in the water adjacent to the ticket booth. He was a big one. I tried to get pictures of him through the fence but seeing them from the boat with no fencing separating us from them was really awesome. One smaller gator was about two feet from our boat and she swam away as we approached but I was able to get some good shots as she was on my side of the boat. I made sure I dove for an end seat on the boat when our number was finally called – I wasn’t going to like the speed but I was going to get a prime picture taking seat. It occurred to me later that many people actually go on the trip for the airboat ride not for photo ops – I was one of only a couple of people that carried a DSLR camera. I was not there for the thrill ride but I did get to see some gators and that made the trip worth it-even the 180s. _ well maybe.

This is the guy we saw when we were getting our tickets.

Another shot of the guy we met at the ticket booth.

This is the gator that was close to my side of the boat on our tour.

My dad – who was also on this ride with us- said- “It was my first and last airboat ride” – yes Dad it is a one and done for me too. But it was worth the scariness and the discomfort I think.

I wanted to chat a bit about the “zoo” that was part of the tour companies property. We got free tickets because there was a long wait for our turn on the airboat. The zoo was an enclosed area of maybe an acre or two that housed some pretty amazing animals. I am not a big fan of these types of zoos – the enclosures are not big enough for the animals that are in them. There were even signs all over saying they knew that the enclosures did not meet USDA requirements and they were in the process of building more. I didn’t see any evidence of that on the premises so I had to have faith that these signs weren’t just up to appease the masses. I will say that all the enclosures were clean and all of the animals looked healthy.

I enjoyed taking pictures of the animals there. They had a room of reptiles that were examples of what lives wild in the area- and there was a burmese python along with a rattle snake and some lizards. My camera did not take a good shot in that room – but the python was scary big and I was told that was a medium sized guy.

I was floored to see a panther,and even lions and tigers in this zoo. They were all sleeping or sunning themselves- none seemed particularly stressed in any way. Of course there were tons of gators and they had some crocodiles too. In one enclosure we saw some birds – egrets – I think- and vultures. As I mentioned before there was a lack of birds out in the glades- but plenty that flew in and out of the enclosures. I also fell in love with some otters. How can you not love an otter?

Overall I think the trip was really fun. Most people don’t hate fast boats as much as I do.  If you go have lunch in Everglades City first. They have a few restaurants that are pretty good. We ate at one that was changing management and they were in the middle of a huge remodel and there wasn’t even a name on the place but my dad’s wife ate there before so we trusted her – it was a mess inside but the back deck was open. And we had a nice lunch. I may or may not have tried and liked gator bites- but I am not saying. The gators might find out and they bite…! 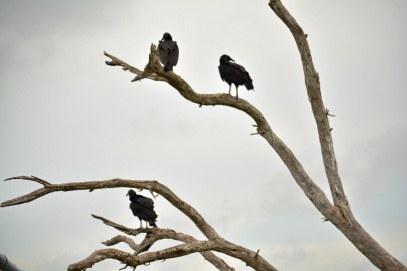 Vultures in the tree 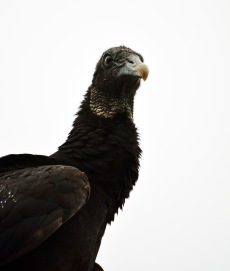 waiting for a snack

This panther awed me.

I think he was trying to tell me soemthing!

Crocodile – He was HUGE!

Were these turtles dinner or friends 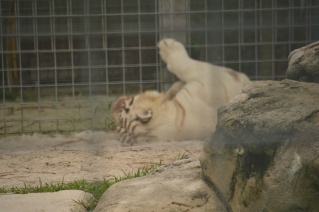 In a real zoo you would never get this close to a big cat like this unless there was glass between you and the cat! 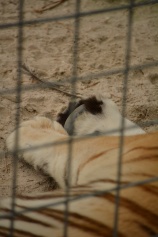 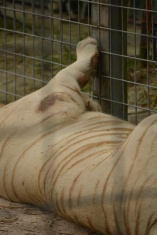 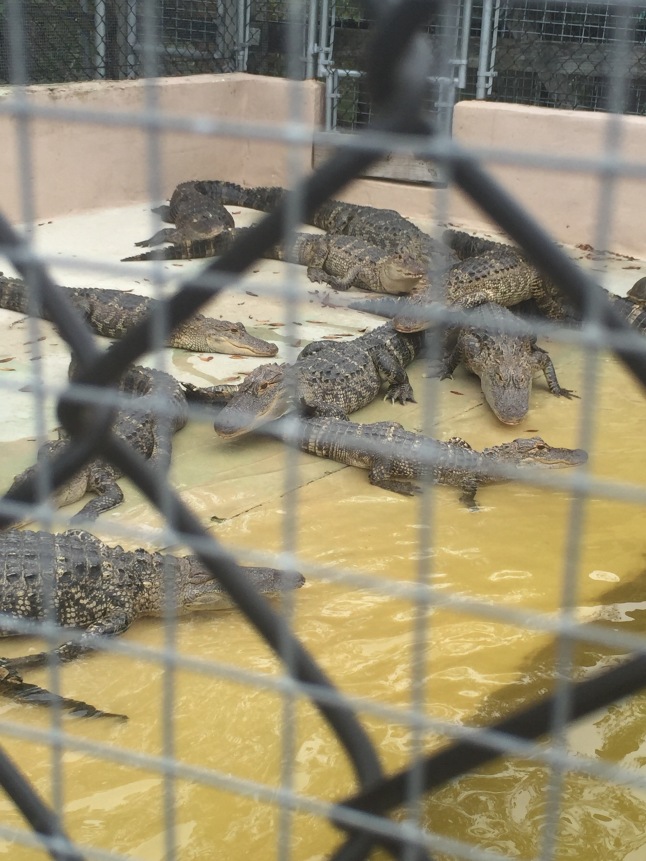