Well here we are back again for part 2 of the chicken coop build.

We left of last time after we put up and secured the wall frame. Once we did that part we left it for a few days in the rain (its been a rainy spring in Central MD.). And the good news is that it didn’t fall down.

Roof Joists – After the wall frame went up Kevin cut the joists for the roof. It can be a little tricky. It is very clear in the plans and once you get the hang of it things go smoothly. One thing about putting up roof joists- they need to all be even. Later when we put the roof sheeting on we had a bump – a gap- whatever – a leaky place – which occurred bc one joist stuck up a little higher than all the others. We made it work as I will explain later. But just be careful so you don’t have to stress about this later on!

Pre-painting – I decided to paint all the trim and siding before we put it up. I knew we would have to touch up the paint once the walls and trim were on but it would be much quicker than starting to paint it from scratch when it was up. I have bad shoulder and it would have been too hard for me to do it that way. So pre-painting ended up working really well for us.

Choosing the colors is much of the fun for me and I chose a pretty golden yellow and a blue/green for the shutters and a basic white paint for the trim. I had the paint mixed at ACE. I can see where some might opt to stain the T1-11 siding as it sucked up a lot of paint- thus increasing the cost of the project (we used 2 gallons but bought a third for touchup etc. $30/gallon – yikes!). Again in hindsight I should have either stained it (if I could have found a stain in a fun color) or I should have gotten a cheap tinted primer first and then painted it with the paint for the second coat. We used rollers meant for rough surfaces and I still had to brush in the grooves of the panels. Painting the trim was straightforward.

Siding – The plan calls for T1-11 siding. You could use whatever you like really. We stuck to the plan bc we are novices. We ended up getting the thickest of the T1 siding. You can opt for thinner. I just wanted to be sure we got a product that would not break down and this stuff seemed very durable. It was $30 a sheet. So it wasn’t cheap.

We made an error – well I made an error and it turned out ok but lets me tell you what we (I) did so you know what you are getting into if you make the change. When we went to cut the siding I wanted the siding to match our other coop and the other coops T1-11 siding has the panels running vertically and not diagonally. So we made that change. When we went to put up the siding on the sides of the coop the pieces were was a bit short bc there is a lip on one end that is meant to be used to join the pieces together. On the plan it said to cut that lip off- I am so glad we didn’t otherwise we would have not had a piece that fit at all. In our case we could still put the piece on and then cover the small gap with trim..it was a small gap.

In hindsight this is where I learned not to make a change unless you think it out or have more experience. Had we planned the change the direction of the siding from the start we would have been able to adjust the wall dimensions some to accommodate the change in direction of the panel. Which would mean making the side wall a tad less than 4 ft wide and the front and back a tad less than 8 ft wide. See how accurate I am being?! OR you can make the dimensions the same and use an extra piece of T1-11 and close up the sides using 2 sheets on each side. Or better yet just use the T1 in the horizontal position! 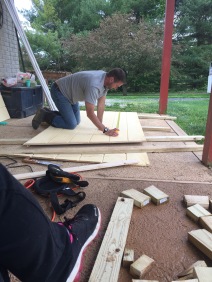 Trim – The instructions say to cut the trim to fit the dimensions needed. So you need to measure and cut. The reason for this is that there is a variation in thickness of T1-11 siding. So we measured for our trim and we changed it up by putting the side trim up first and then the front and back pieces. It was working better for us because we needed some forgiveness on the side since we had short siding (see above under siding). Make sure you cut the back pieces at the 15 degree angels as noted. ALSO make trim flush with the siding which is hopefully flush with the roof trusses. We had a little issue with the roof board laying flat – see below. 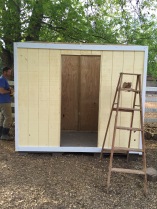 Roof – So the roof- that feels so great getting to the roof. Its like so close to the end right?  Well the roof was a pain. I don’t know if it was because we turned the siding or our measurements were a bit off but we could not follow the roof directions as explained in the plans. We could not cut three pieces of plywood and make the roof fit. So we ended up having to get another piece of 1/2″ plywood and we made the roof out of two pieces cut to fit. We almost had Armageddon over this issue but in the long run who cares what went wrong- we just needed to get a roof on and thats what we did!

So once the roof was on we realized that one of the trusses was a bit higher than the others so a gap was created in the roof. Gah! It seemed like it could be a big deal but we solved it but adding a drip strip to all sides of the roof. It lays on the roof and helps direct the rain off the roof. It also hid the gap in the roof – yay!

We were lucky in that we had some roofing paper and shingles already in our barn. This is why you never throw stuff away on a farm! So we laid the paper on and I think Kevin put the drip strip on after the paper. Except the back side where the issue was – he put the drip strip on just before the final shingles went on as we had not planned on having a drip strip in the back at first. (hey we aren’t roofers lol!) Kevin watched a number of videos on laying roof shingles. Youtube was a huge help during this project! Once the paper and drip strip were down Kevin put on the shingles. The roof came out great. You could choose do cover your roof with many different materials I am sure – I kind of wanted a metal roof but we had over spent on the project already so using the existing material was a must.

I will report it has rained a ton since that roof went on and there have been no leaks. Yay! I do think in the winter I may add a layer of insulation to the underside of the roof to add some warmth for the girls.

This made me super uneasy!

the gap we ended up covering with the drip strip.

Door/ Chicken door – For the front door we pieced to leftover T1-11 siding that i painted in a pretty blue green. You must measure your door and if off square build to fit. Our door was not square we built it 1/4 smaller (see directions in this blog for help).  I bought Kevin a small Kreg pocket tool for this project. It is the mini one and it worked really well for the door frame assembly. We also had a sander to help if there were any sticky parts. But the door went on really easily. Kevin got some nice hardware for it. Kevin had been stressing about the door and he did a great job on it. In fact he took what he learned and applied it to build a new chicken door on my run that is part of the other coop.

I built and installed the chicken door. Well Kevin cut the hole but I painted the trim and door and installed it. I attached a hook and eye so the door can be latched in the open position. I think it is so cute.

Can you see how cute this coop is?

I will say I had fun building the shutters. I winged it – not like me – but the plans didn’t really explain how to build them. This is the first time I ever used a chop saw (Miter saw) and I must say it was fun!

For the shutters I took 1×3’s cut to length and measured a cross piece (x2 for each shutter). I lined up the pieces- used glue first and laid the cross piece on top and then nailed it together. My son, Zach, gave them a sanding since furring strips can get splintery. I painted them and let them dry overnight. We installed them and added hardware and aside from the fact that they don’t really fit they are super cute! 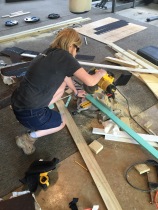 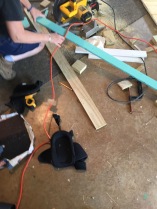 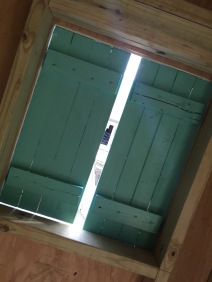 Um yes here is the gap! 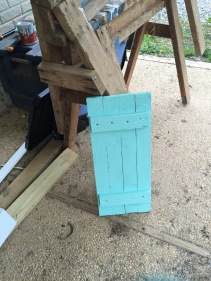 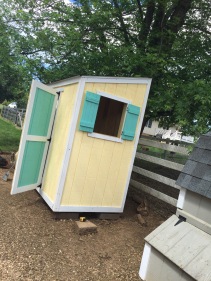 So now we are just about done! I went back and painted the trim and touched up the siding.

Kevin added nest boxes for me. I bought big plastic nest boxes that were going to mount inside. He hated them (they were ugly). We opted not to have an external nest box because we were not feeling 100% confident building something that hung off the coop. So Kevin built three nesting boxes inside. It may be hard to collet the eggs since they are so low but I have some ideas if that is the case. Think doors like the chicken door!

Kevin added a couple roosts above the nesting boxes. I hope they work but we can always move the roosts if needed. I wanted to leave them above the nest box platform in hope that maybe I could clean that platform often and the rest of the coop less often – but we will see! 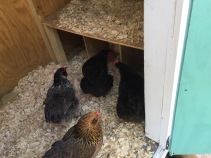 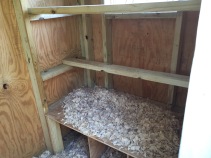 All I can say every time I walk by the coop is “It’s so cute!” and to be honest I still cannot believe we built this and it looks so great. Is it perfect? No! But we learned a lot in the process.  I think in the end I may have enjoyed this project more than Kevin did. But he did the bulk of the work and he did an awesome job. I think there could be a she shed in my future- just saying.

But in the meantime isn’t this coop stinkin’ cute? 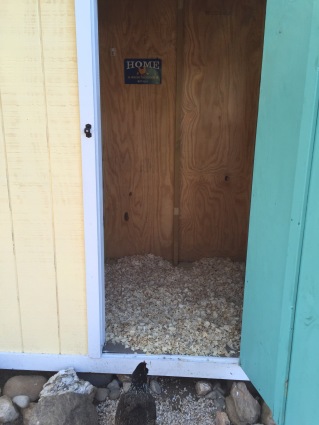 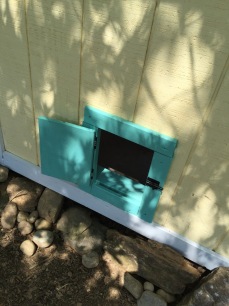 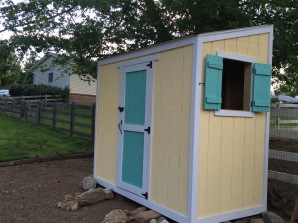 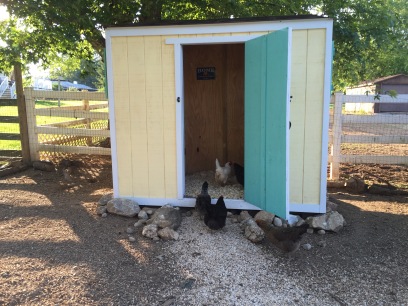