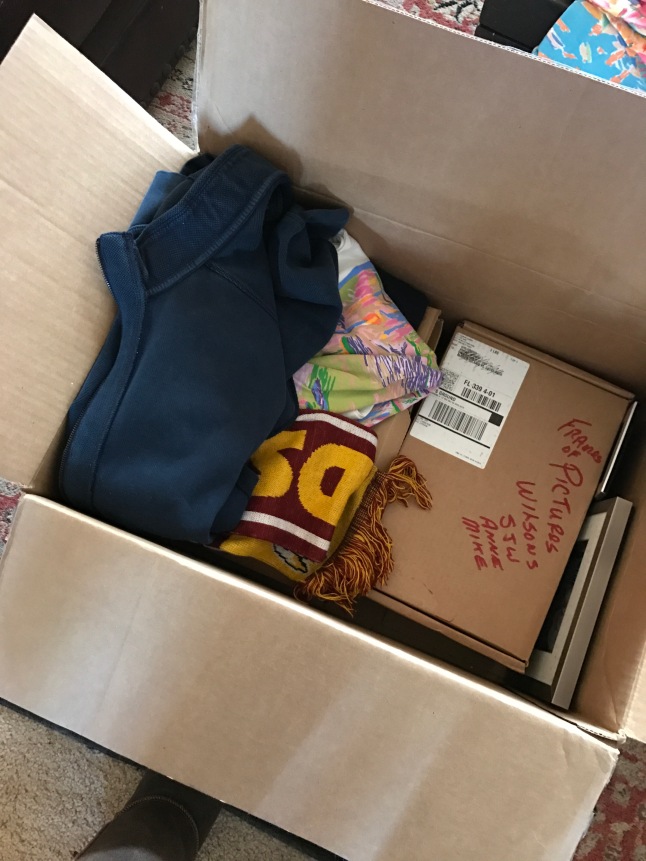 The boxes of my dad’s things arrived today. I knew they were on the way because my brother told me so. But I wasn’t ready for them.

There they stood in my family room. I didn’t want to open them -I didn’t feel ready but curiosity got the best of me.  They sat beckoning to me for about an hour before I gave in. My son cut open the boxes and we began to sort through.

I thought there would be mostly photos and that was true. An album from when I was a little girl contained lots of photos I hadn’t seen in years. There are photos of old friends and family and events I hadnt thought of in years. There were pictures from my 8th grade graduation and my dads marriage to Jean my step-mother who passed away in 1994. I picked up a photo in a frame of my brother and my dad and I taken about 14 years ago in the backyard of my old house. Wasn’t that just last week? My dad looked so good. I never thought of him as old until I saw him last March. He was walking stiffly. His memory was pretty bad. Had that oldness been something that had been there that I didn’t see?

Oh I miss him so much. My brain has such a hard time wrapping my mind around the fact that he is gone and not in Florida any more. His condo will be occupied by renters in a few weeks.

There are so many pictures to go through. Pictures that bring back memories of good times and even bad ones. But mostly they represent the fast passage of time. My husband kevin was doing the same traversing time through his family pictures this week as the brothers readied there childhood home for sale. He said that looking at those photos really made him realize how fast life passes and that it’s time to get busy living. He knows I second and third that statement.

I can get through the photos -but it will be a process. We will be sending them to a service that will copy them and then send them to us on a DVD and a thumb drive. Then my brother and I can decide which originals we’d each like to keep.

After I opened the boxes today I realized that I wasn’t ready. Along with the photos were some clothing of my dads. My brother -who went through all the items in my dads condo with the help of family – told me he was sending some clothes along to see if my boys or kevin might want them.

I wasn’t ready for the clothes but I didnt know it until I went to open a plastic bag containing a a couple green shirts.

We had just begun looking through things and I picked that up and opened it. That’s when my heart fell. It became so real for me right then. Touching his clothes. A solid green rugby shirt with and Irish emblem at the breast. Along with it a green Villanova t-shirt. No doubt items my dad wore on Saint Pattys Day. Dad embraced his Irish heritage and would have proudly worn those shirts on March 17ths of many years past. I held the shirt and a wave of sadness washed over me. Then as a reflex I brought it to my face and smelled it. It smelled like my dad. It was clean but perhaps it was the smell of his condo or the shirts had sat in his closet near his cologne- or maybe I imagined it -but that was all it took for the dam to break. I began to cry. My mother    who hates when I’m upset began to cry and jumped up to hug me. Clothing was my Achilles heal. Clothing made it real.

I couldn’t touch the shirts again. I couldn’t put any other item of clothing near my body. I just shuffled the clothes around the box as I took inventory of the items the boxes contained. My son put the green shirts back as i composed myself. I could see it made him upset when I began to cry.

I know I have to grieve but I don’t like getting others around me upset when I do so. I take my grieving self out on a walk or I cry in the shower. But today touching the clothes was just too close to touching my dad. Maybe because I couldn’t be with him when he was dying I was able to somehow pretend he was still alive in a way.

I ‘m very effected by smells. I have a chemical sensitivity now. I can smell stuff nobody else around me can. It drives my family nuts. But  I still stick my head in the dining room hutch that was my nanas. I painted it last year but not the inside. And when i open the door and sniff I still smell her apartment -and emotions and memories wash over me. They aren’t so raw today as they were in 1987 when she died. The smell gives me peace now.

But today the green St Pattys day shirt got me. I want to keep that shirt. When I first saw it I immediately thought of myself wearing that shirt this March 17. But I’m not sure now. It’s going to have to stay in that plastic bag for a while. It’s just too raw.

Funny what makes us feel such grief and emotions. I don’t know how my brother went through all that stuff. I’m glad he had help from his family. I imagine through the tears there were some laughs too.

I still picture my brother as a young boy the son of a father who was so big to both of us. I picture that little soul going through all those things of my dads(how did he grow up so fast?) and I picture him looking at those green shirts and putting them in the box. That soul in grief -Sending me items that he couldn’t stand to give to charity. They wouldn’t mean anything to anyone that saw them on a Goodwill rack.

But to me they mean everything.

One thought on “It was the clothes that got me. ”