I was fresh off of steroid injections from my nerve surgeon and I was having a good day. Which means low pain.  I decided to step out into some of the oddest and beautiful weather I have ever seen in February.  It was 75 degrees.

Carrots in hand along with some goodies for the ducks and chickens I began my rounds.

Since they’ve moved in next door I had only been over to mini-donkeys  Merle and Leona’s paddock once. So today with carrots in hand I fed them and I think we are going to be good friends. I’ve always wanted a mini donkey. Austin their human told me they plan to breed Leona soon. I can’t wait to see what a baby mini-donkey will look like. Maybe the cutest thing on the planet. 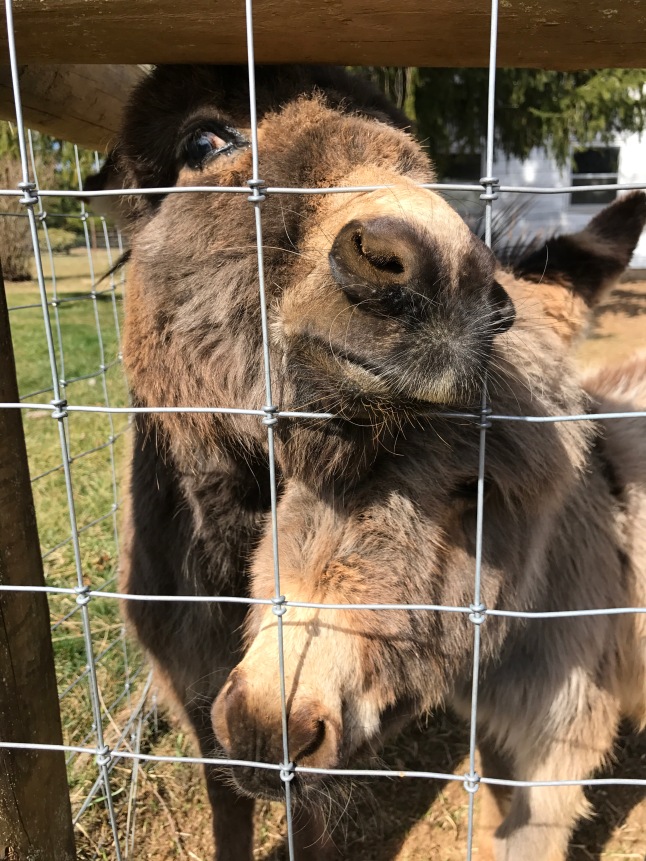 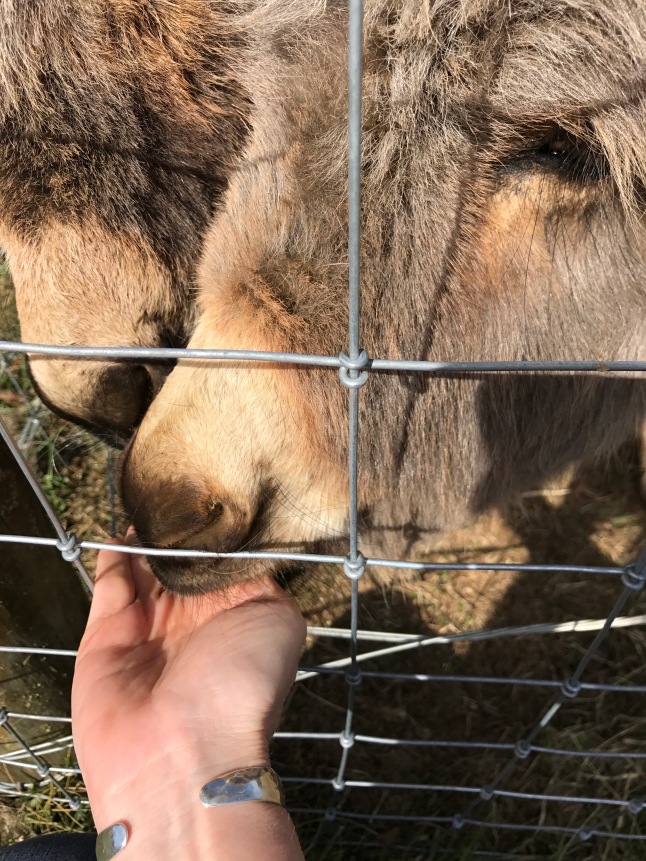 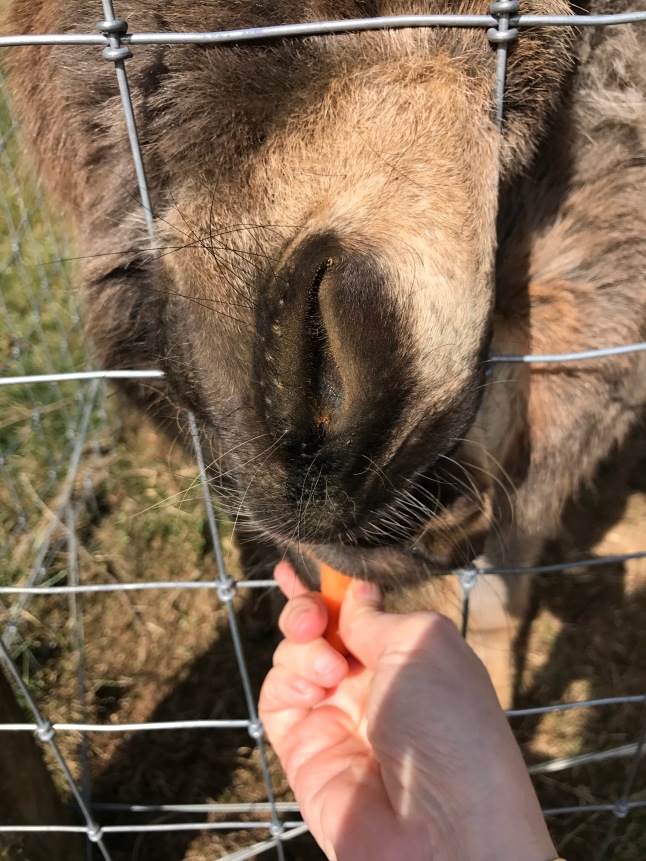 The day was almost a little hot. Like I could have gotten away with shorts. I was a bit hot in my jeans. But thankfully there was the often present Mount Airy breeze. Ergo the town name.

I made my way to the chicken enclosure and tossed out the squash and tomatoes. I noticed that a couple of my ducks weren’t looking well. One was looking very poorly. I’d need to have help getting her as I can’t lift anything. Three of my ducks are getting old. So seeing a couple looking a little worn isn’t a shock but I have antibiotic and some other items that could perk up the fowl. So it’s worth a try.  I’d have to wait until I could get some help so I went on my way to enjoy my visits.

It’s not often lately that I feel well enough to spend a lot of time with my animals. But the injections were working  and I knew if I didn’t watch it I’d overdo it. I wasn’t using the arm and side that is having the pain but even using the other arm which is slowly unfreezing from frozen shoulder can cause issue. But it was a beautiful day and I was feeling almost normal for the first time in a good while. You just sometimes have to take advantage of the moment and not worry about the future.

I went to stand at the fence not sure what I would do next. See my horses  or maybe take a walk. I had been up the night before in insomnia mode and had been thinking that I needed to begin working with my horse again. Beginning with simple grooming while tied. In this way we can work up to his getting saddled over time. He hasn’t been ridden in a while and I have left him to be a pasture horse. So getting him used to be potentially ridden again -even though I can’t ride yet and probably won’t be for a while since I’m looking at more surgery – will make it easier on him and me when the real event occurs. It’s better than tossing a saddle on him and hopping on his back after a year on what we riders sometimes call mothballs. Plus I’m hoping maybe someone will want to ride him for me.  He’s gaited so it’s like driving a shift car vs an automatic. It’s easy once you learn.

I had a visit in the field with my horses and took the shedding blade and treats. I didn’t put Harley on his lead and tie him today but we had a nice visit. 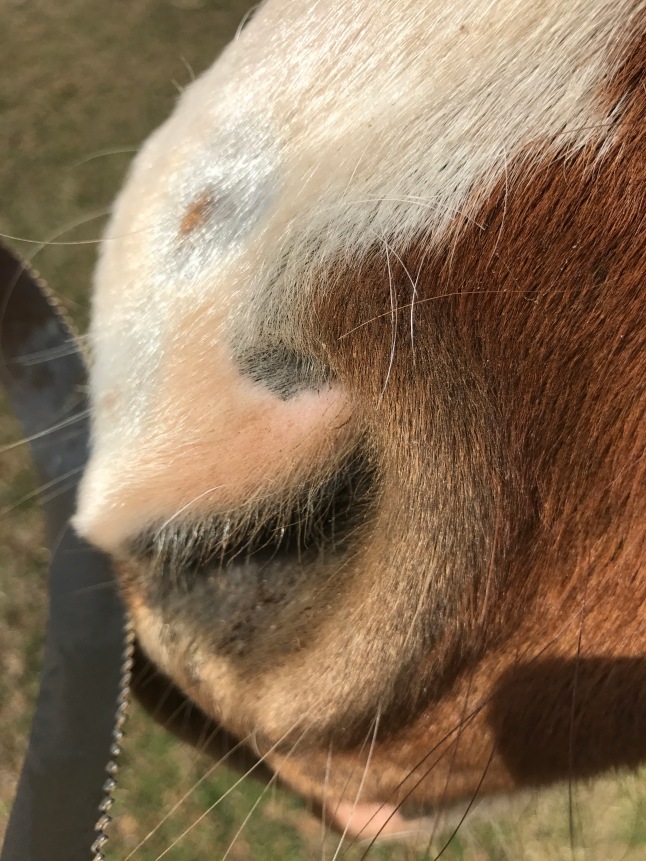 As I was coming out of the pasture I saw hubby Kevin on his way down to the barn. He was coming to take a work break and check the chicken feed and water. So I asked him if he would like to wrangle my sickest duck so I could see if I could help her. Duck wrangling was not on his agenda. But he’s always willing so I gathered my meds and he was able to grab her without any issue. I didn’t take photos of the actual medicine giving because I was the one giving the meds and the duck was stressed enough  with me having to get her mouth open to stick the medicine in -a photo shoot would have been too much.

We don’t pick up the ducks often. They are more of a pod that mill about together as one entity. So when we have one up close I am always amazed at the thickness of their feathers and beauty in their beaks and eyes.  Their feet are so cool. Perfectly made to swim and to walk on land.

Duck medicated and fingers crossed but not overly hopeful we put her back into the duck pool. A cheap Walmart pool. But a huge treat for them in the midst of winter where usually we are only filling up the heated water buckets. Watching ducks grab a swim is the best. Their appreciation and bliss is so apparent as they primp and flap their wings. It makes me happy.

The mud puddle that the dumped dirty water from their pool makes them happy too. 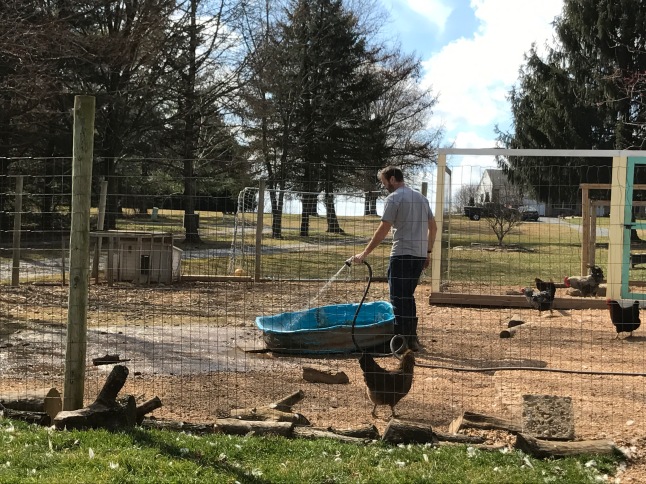 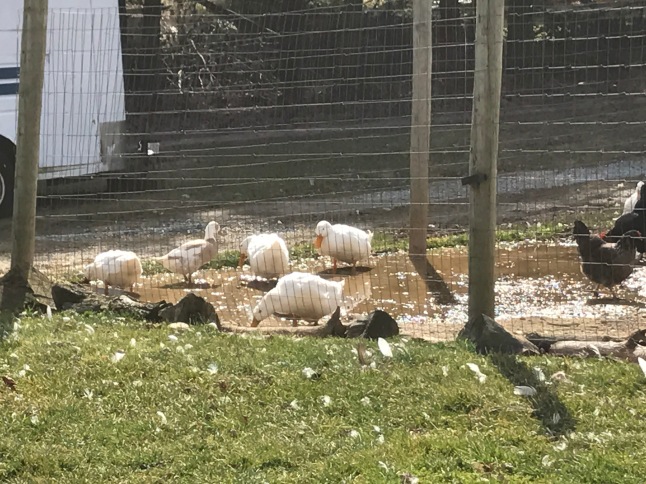 In all of my dealing with this pain I have been trying to walk everyday and once in a while I feel like I can go into our gym and I can do some leg work. Keeping strong as I can has been important. Working out has been part of my life since I first went to a gym at age 18. It’s a mind body thing for me. After being bedridden last summer I was pretty weak despite my walking almost daily -and over the last few months I have gotten stronger. But lately the pain is worse and I’m not doing as much but I’m trying.

As I was looking out on the pasture I looked at the round pen made out of steel.  A round pen is a place where you can work a horse. It’s about five feet high. I just had the feeling I needed to climb it. Our horse pasture fence is made out of the non-maintenance plastic fencing.  Such a bad choice for horse fencing because it’s flimsy really but it was here when we moved in. It’s not something you want to climb. But steel you can climb.

I’m not sure why climbing the round pen fence was so important to me. I have done it before – on a day where after months of cancer treatments I tried to get up on my horse and was too weak to do it. At that time my cancer side arm was frozen making pulling myself up into the saddle difficult and a shedding horse and slippery saddle made the effort even more difficult. I ended up using the mounting block to get on. No shame in that but I wanted to be strong enough to get on without it. So maybe out of anger I went over to that fence after I put my horse out in the pasture and I stood looking at that fence grabbed the cold steel and I climbed up it and it was hard -so hard- but after weeks back in the gym I went back out and climbed again and it was easier.  I was able to mount my horse without the block. I was back.

But then last summer happened.  In pain and bedridden much if the time.

And here I am. Not allowed to ride at all and frankly I couldn’t now. Too much pain. But on a day like yesterday I felt a little determination to climb that fence again. So out I went in my muck boots not great climbing shoes. I faced my challenge and grabbed the warm top bar  -hot from the way above average temps. I had no plan but I knew I couldn’t use my “bad”side at all. Up I started. It wasn’t pretty. A frozen shoulder -even a thawing one -doesn’t give you much leverage. But once my foot got to the third rung gravity gave up and next thing I knew I was on top of that fence. I sat there a while.  Took a video and some photos. It was so beautiful.  And I felt strong. Maybe not where I want to be physically but it’s the mental that’s most important and mentally I felt strong.  And after I got down I went up two more times.

Just because I could. 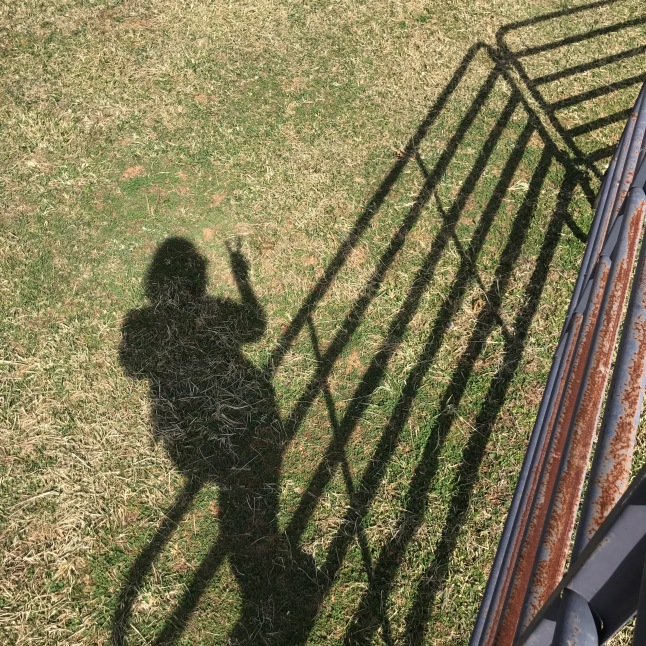 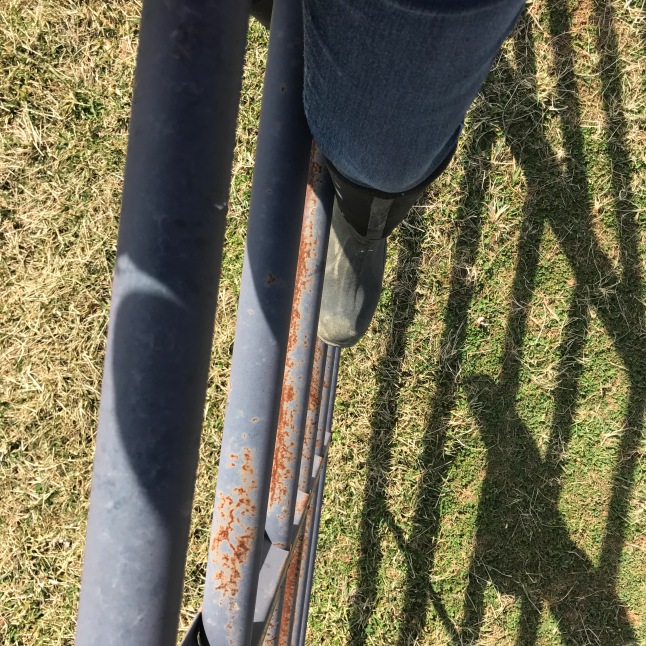