I’ve long said that your home is where your people are. I’ve moved enough times to know this to be true. That’s not to say I haven’t had some sentimental attachments to a house. I have. I have driven past homes that I’ve lived in and felt the little heart pulls. It’s not really for the bricks and mortar of the place – though I can remember the worn carpet places on the steps of my childhood home – it’s the memories the house represents.

I remember the green counters in Kevin and my’s first home we built together – a cute townhome in Germantown, MD. It was there we brought our first child home from Kazakhstan. It was there I became a mom at age 37. It was there where my life went from being so me oriented to being family oriented. Other people mattered. I began to grow up there.

It’s the memories these brick and mortar places hold. We can take the memories with us in our minds, hearts and photo books but there’s something so sweet when we drive by the old places.

I have some sad memories from some of my old childhood homes too but they represent places that shaped me in some way. So good memories flow with some not great ones. For me I see the swift passage of time when I see old photos of these homes or I drive by them.

For some reason lately that realization of the fast path that life takes has been weighing on me. So it’s not surprising that I have become overwhelmed by sentiment at the sale of my dear inlaws home.

My inlaws have owned that home for nearly 60 years. The little Aspen Hill neighborhood known as Harmony Hills has turned over and and over and over family after family-Kevin’s parents were among the few original owners left in the neighborhood- now one sees many little children running about as young families have moved in. It’s a working class neighborhood now. It’s close enough to the city to be in demand and their house sold quickly. I wasn’t surprised. .

But I was surprised at how sad I am about it.

The sale had to happen. My mother- in- law is in assisted living and we lost my father- in-law a little over a year ago. But their home – not house- their home is one place I have only good memories of. The many dinners with everyone crowded in the living room chatting after a good meal. Lots and lots of laughs. My kids playing with old metal cars or Legos in the basement. The “picnics” in the back yard, Easter egg hunts , gift exchanges and lots of love. It all existed in this house.

It’s hard to believe this little house raised six boys. My husband tells stories of knee football games on the lower level. Sometimes an adult voice would yell down to be quiet. There were sibling arguments too. Much expected with six boys.

That house held many diaper changes and bottles , then much sports gear, many class photos, then graduation pictures, then wedding photos, then grandkids and great grandkids. Those people in those photos have all stepped foot in that home. Thousands of meals were prepared by one of the most kind woman I have ever met. I can see how my mother-in-law might have had the patience to raise six boys. She was a mom to all who came through that home. She’s been a blessing to me and words cannot express how thankful I am for her. She got me through some hard days. She may not even know it. Sometimes  my phone would ring when I would be at my wits end with work or tired from being with my little kids all day and she would be on the line just checking in- and it was just what I needed at that moment. She never intruded, she never judged. She became my friend.

Once I asked if she ever got mad. I’ve never really seen her mad in the 20 years I’ve known her. Kevin -my husband-told me that a few times when he was young his mom got up from the dinner table while they were eating -said nothing – and went quietly into the bedroom and shut the door. I nod my head in understanding. She was overwhelmed with men. I picture the small flask being pulled out from under the mattress! Six boys. One husband. She had to have her moments. No wonder she made so much banana bread.  Baking was her solace. Her banana bread is talked about in many circles. It was that good.

Six boys raised by good people. Extremely good people. My father-in-law was maybe the fairest person I’ve ever met. He never told anyone what they should do. If you asked him his opinion on something he would tell you what he might do in a given situation but he never pushed anything on anyone else. He believed his sons needed to make their own way and learn from their mistakes. He was also generous. If someone needed a little help he would freely give what he could. This wasn’t a wealthy man but he was rich. He had so much more than money. He had wisdom and love.

Dad was quiet but I’m told that when friends of his sons came over they feared him! Apparently he had a look that made any kid snap to in an instant. Once he told a friend of the boys to move his car out of the driveway and the kid not only moved the car- he left entirely! He was gentle yet firm. I knew only the gentle man and gentleman.

The living room home to many gatherings.

Each person who has been in that home had a different memory and perspective of life there. What I know is that my life changed there. I became part of big family. Something I always dreamed of. And that family welcomed and accepted and loved me for who I am warts and all. I watched my children who came to us through adoption be loved and accepted without question. I saw them thrive in that love.

We laughed and we cried there.

That little house holds so many memories. And new memories will be built there by a new family. 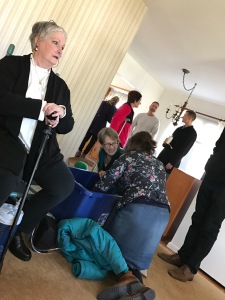 Family visiting the house before closing.

If it’s walls could talk the stories it would tell. The one thing that that little house did was hold six boys that were raised to be wonderful men. Gentle men and gentlemen. Men that today make sure their almost 92 year old mom gets the best care possible.

That’s what that little house did.

I will miss that little house. 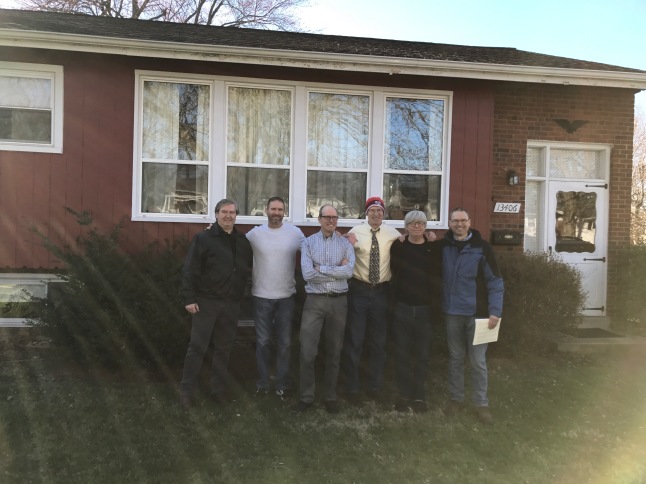