My dad called me “Cool Breeze” when I was a teen. I hated it. It implied that I was trying so hard to be cool.  Which in fact I was trying to be cool but he needn’t point it out on a daily basis.

My dad called a spade a spade(I kind of inherited that trait from him but I think I’m a little softer in my approach but my teens might not agree.) . And he was half joking. It was his way of taking out his frequent frustration with his teen daughter in a comical way. But I was an all about drama teen and I did not like the name at all.

He would sometimes make it all drawn out. “Here comes Coooool BReeeze , Cooooool Breeze”. It probably didn’t help I carried a large comb in my back pocket and a big attitude on my shoulder.

I tried to ignore it. Sometimes it almost made me laugh when he said it. My dad liked when people were in on the joke but I would not give him the satisfaction. We weren’t buds. And I was trying so hard to be cool. Forget that I was majorly insecure. I would play the part of cool teen. But sometimes my facade cracked.  That’s why the name stung. I was so far from cool.

But I get it now. And I miss my dad and would love to talk to him again and say “remember when you used to call me Cool Breeze?”  And we’d laugh.

Over the years we’ve talked about  old Cool Breeze. And I even gave him the satisfaction of a laugh. And the name became a memory –any sting I had from it is long gone. It became a story between a daughter and a dad who sometimes struggled to find things to chat about.  I tear up writing this because I can chat up the best of them -why was it so hard to find things to say to my dad?  And he me?

I sure can think of lots of things to say now. We weren’t perfect but I miss that man. I tell him that everyday when I wake up. Sometimes I hear him in my head.

And recently  I was searching for a name for our newly purchased beach cottage. A dream that came true only because my dad isn’t here and my brother bought me out of my dad’s Florida condo thst we both inherited. But our beach cottage is a true dream that became real on April 10, 2017.  It’s still sinking in – and I thought we have to name it something to remind me of my dad. I went through a bunch of ideas. I didn’t like any. Then one day I began pondering name possibilities and Cool Breeze just popped into my head.

Of course- so I sent Kevin a text “how does Cool Breeze Cottage sound?”

“Perfect”. He wrote back.

And so I want to introduce you to Cool Breeze Cottage in Delaware. It’s six miles to the beach but a couple minute walk to the Indian River Bay.  Far enough to get away from the crazy summer crowds  of Bethany Beach but close enough to join in when we want.

We are one of the smallest houses in the neighborhood but when I first saw it online I didn’t know that. And something about the place drew me in. I wasn’t going to look at it because it was out of the price range. But on one sunny day in February we drove out to the shore to look at a few places. I was in pain and traveling for me involved laying in the back of our conversion van with my dog and  popping pain meds and streaming shows on my iPad while Kevin drove. My goal was to get out of the van look over each house on our list and get back in the van and go home.

We finished our tour of four places and we had two good possibilities and I told Kevin to drive up to the neighborhood where we had looked on one previous trip where we lost out on a house because we weren’t quick enough to make an offer. I loved that area and as we drove I opened realtor.com on my iPad and checked my saved listings and that cottage popped up and had dropped 17k!  I did a double take then told Kevin -we were looking at the cottage at least from the outside.

We pulled up in front of the gray blue cottage and called our agent right away. She came right over and let us in and the rest is history.

It wasn’t until we made the next trip over (again me in the back of the van on pain meds) for the inspection that I noticed what the neighborhood was like.  And how close it was to the bay. Kevin and I walked over to the little walkway that led to the bay beach and we just grinned at eachother. It’s a dream come true. We are excited and humbled at the same time.

I’m determined to enjoy it despite pain issues. In spite of pain issues 🙂 We hope to make some good memories there.

My dad and  I had talked about maybe buying something together at the Delaware shore not long before he died. He loved that area. We spent many summer vacation weeks there. My love for the area continued and we began to go with our kids when they were pretty young.

My dad will be missed but somehow I think he’ll be around. And I think he’d be proud. And I’m pretty sure he put that name in my head.

Cool Breeze . A name I hated, then laughed about and now love. 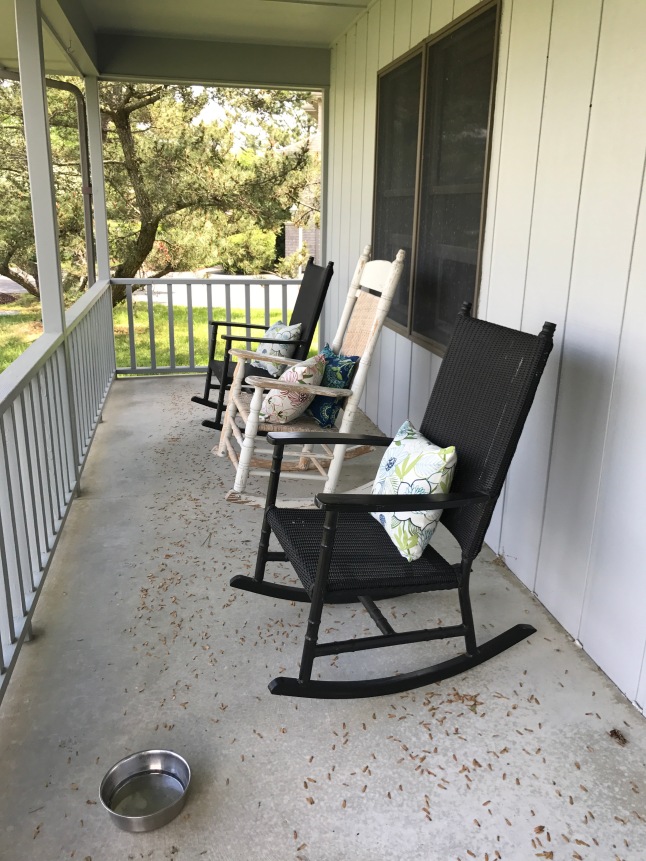 One thought on “Cool Breeze Cottage”