Though he has quieted down a lot since Monday, Harley my Tennessee Walker was very upset the day we put Airy down. We had the vet 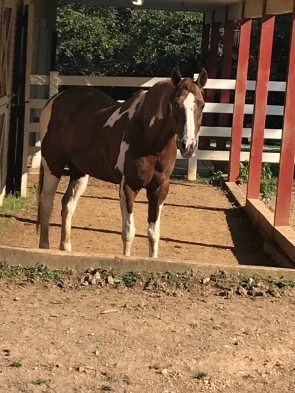 give him a sedative and he saw Airy’s body. It didn’t settle him down too much. He pranced around the paddock calling to her. He got no answer. He was pushing up against the fencing trying to get to where he last saw her. I feared for his safety – I feared the fencing might give. So we opened the pasture gate- the one furthest away from her body and hoped he would graze.

He would run in and out of the pasture calling to her. Not gonna lie – my heart was breaking for Harley too. He was confused and stressed and I had no way to take it away. The first night was hard on everyone. My initial shock wore off and the dam of tears came flooding out. I could not stop crying. I cried for the loss and the trauma my horse went through leading to her death and I cried for my living horse who was calling periodically throughout the night for a friend who would never answer.

I could not sleep in my bed that first night. I took to the family room couch – it faces the front and side of the property and is furthest from our paddock. I couldn’t bare to hear Harley calling to her. I put earphones in and listened to the oceans waves and read my book and must have dozed for a few hours.  I woke at six and it was quiet. I hoped it would be a better day for Harley.

The truck came to take Airy’s body away. I could not stand to go out so my ever strong husband went.  Sadly Harley became very upset when he saw the truck. I could hear him from inside. There was no way to block his view and I am not sure he knew what was happening or if he just knew someone was near where he last saw his friend. When the truck pulled away Harley went on calling her.

I knew he was under duress and I wanted badly to help him. I had little I could do though. I went to the feed store and got some natural calming paste and I got some probiotics. In times of stress Probiotics are helpful to help alleviate ulcers. Thankfully Harley has been eating and drinking just fine.  I gave him half the paste in the tube and hoped it might help a little. I brushed him and pet him and talked to him.

Wednesday he was much more quiet. He called a couple times and was much more vocal at my approach to the barn. I have been watching him. And he mostly sticks to his stall. Thursday we opened the pasture gate closest to my neighbors horses and I was hoping he would feel some comfort in seeing them- if they venture out in this heat. I normally do night turn out in summer but now I will do whatever I can to make Harley less stressed.

We had six horses and two donkeys between four small farms on my side of the road. All of our pastures close together. Now only three of those horses remain as one of my neighbors lost two of her horses suddenly on the same day a few weeks ago. So it is a quieter place these days. I miss my neighbors horses too as I was “friends” with her equine boys.

Horses are natural herd animals and I feel they need companionship. That is not to say they can’t be alone – I have seen it before and even the vet said Harley may settle in and do fine as a lone horse. But would he miss having a buddy? I am not sure I should put the human term lonely onto an equine- do they get lonely? Is he grieving? I am not sure what it is but herd animals depend on each other for safety, companionship, and even to help keep the flies at bay (horse will stand near each other and swish their tails to keep the flies off each other!). There is a need there.

Since I can’t know what he feels because I am not a horse I can only go by my observations. I think Harley was confused and stressed that his companion was gone. If we had a third horse maybe I would not have seen the same level of stress. Horses do bond and I think when they are separated whether by one horse being moved to another farm, or herd, or through death it can cause stress. But something in Harley’s behavior leading up to Airy’s passing and after leads me to believe he knew it was a permanent parting. Horses may not understand death fully but I believe they feel something that lets them know that something more serious is up. 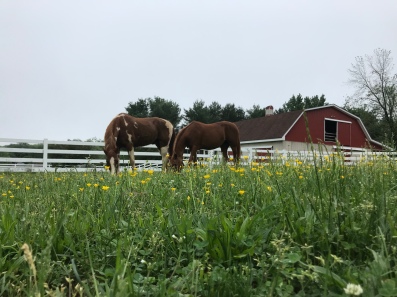 Harley and Airy in the pasture

So I am sure Harley is confused- he’s always been in a herd. Maybe he is lonely or whatever a herd animal feels when it is now a herd of one. As the days move forward he will settle down and perhaps he could be ok as a lone horse but I am not sure it would be the best thing for him- and lets face it if I feel this way then it causes me stress so its not the best thing for me. Looking outside and seeing just one horse seems off to me.

So right after Airy died my concern shifted to Harley being alone. What were we going to do?  If Harley were being boarded with other horses or if we had a third i would not get another horse. Part of me doesn’t want another horse. There is the expense and there is the fact that physically I am not the same person I was when I bought my horses years ago. I have limited use of my one arm and at this point I can’t ride.  So I don’t want a horse that requires being ridden – if I can ride Harley again that would be so great but two needing to be ridden would be too much for me. We also considered having a boarder here. We could get some help maybe in exchange for board – but there is liability in this and I wasn’t sure I wanted to take that on.

I know there are tons and tons of horses out there in need of homes and I know there are plenty of horses just looking to be companions to other horses. Ones that can’t be ridden due to health issues or age. But I still don’t want to own one. The other day soon after Airy died I began my search to see if my needs for a horse could be met so I could meet Harley’s need for a companion. There are a vast number of horse rescues in Maryland but there is one in particular that I was pretty familiar with. I looked on their website – Days End Farm Horse Rescue  – and I saw what I was looking for – a guardian program! Ingenious really.

With the Guardian program a person take possession of the horse – typically these horses are not ridable but can be great companions “pasture pals” to other horses-  and Days End retains ownership of the horse. As guardian we would provide for all the horses needs but these expenses can be written off on the our taxes.  We could return the horse to the rescue if the need arose. This sounds like it could be a good fit for us.

Saturday we will go out to visit a prospective Guardian Program horse named Yukon. A quarter horse Gelding about 18 years old. Chestnut in color (coincidentally the same as Airy was). He is said to have a great temperament and gets along well with his current pasture mates.  We have to have a couple visits with him and one of the trainers at the rescue. If we all think he could be a fit for our farm then he will come here soon after. 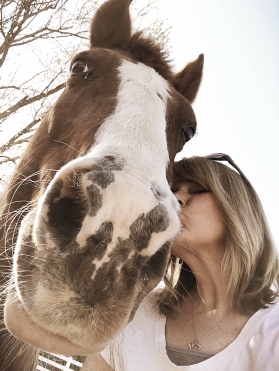 Harley and me- selfie

We need to restore some balance here. I am still grieving the sudden loss of my horse and that will ebb in time but life has to move on and the focus must be on the needs of the creatures that are still living here.

Maybe Yukon will be one of those creatures.  I will let you know how our meeting goes!