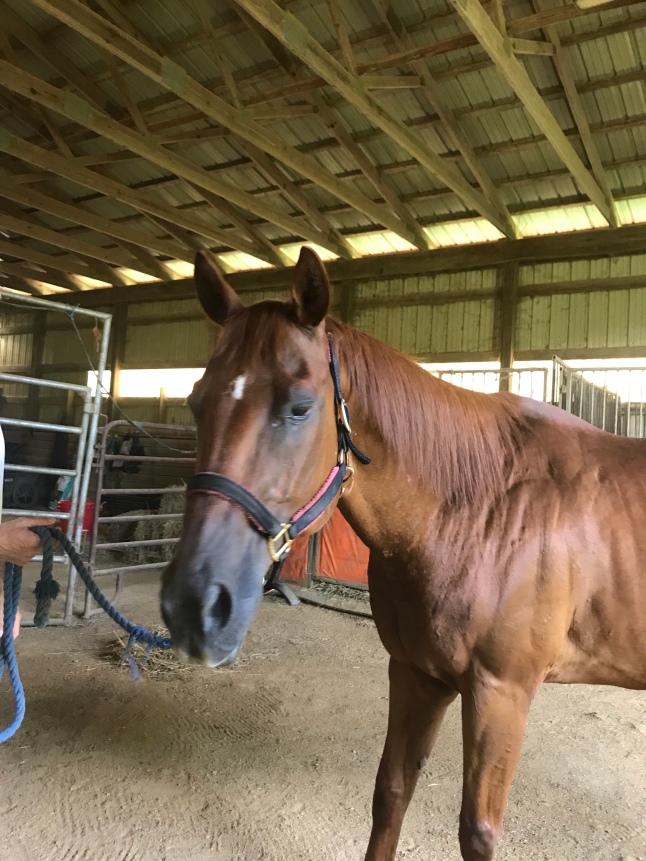 Update – ok so after many attempts Yukon wouldn’t get in the trailer. A storm was coming in and I’m sure he sensed that before the humans did. So he is now scheduled to be brought to us her on the 28th – after we drop the human boys at college.

Today we pick up Yukon. (Rescheduled for aug 28). He’s a 19 year old quarter horse from Days End Farm Horse Rescue. Days End is a well know rescue in Maryland and probably in the Mid -Atlantic and now they will become nationally known because of a partnership they have with a non-profit whose job it is to spread the word about horses in need of homes -esp companion horses -which are horses that can no longer be ridden. There are many places for companion horses – like in our case we need a buddy for Harley.

Days End (DEFHR) has made national news from time to time for their rescue efforts after natural disaster like Katrina. When I go to their farms (they have two now bc of the sheer number of horses they are helping ) I always am amazed at the dedication of the staff there and the care they give the horses.

When we set out to meet Yukon last weekend we headed west towards WV into the beautiful hills just East of the Catoctins. We landed at the farm in Maryland which is shy of the WV line. It was pretty and clean and the horses – most of them companion horses- were well kept.

We walked back with Kelly who is a caretaker for these horses. It’s a big job and she does it well and with a smile on her face. She was thrilled to introduce us to Yukon who is a big chestnut gelding. He is immediately friendly and reminded me a lot of Harley. I love gelding because of their puppy dog like demeanor.

Yukon is a bit nudgy for treats as is Harley. Nothing we can’t handle. I’m told he likes to get in and out of gates first. Airy was like that- except she was last to come in off pasture. Grass was king to her. She loved that more than anything.

Yukon led well and was happy to stand in a grassy area and eat grass as we swatted away bugs.

Yukon has navicular issues which is a bone in the hoof of the horse. I won’t go into details as I’m still learning about it. But let’s just say he has sore feet and is on medication for it. I’m looking for supplements that can alleviate inflammation as well. He won’t be stalled like he is now. He will be free to walk around which is better for his foot pain. I think we will have to rake up rocks in the paddock as well. But the pasture will be a nice comfortable place for him.

So back out to Rohersville Maryland later today. He seems like he will be a great fit.

I’ll write more about him soon. I’m nervous and excited both.

Harley by the way is doing well. We keep telling him Yukon is coming ! More later….

Harley – who is Yukon?