All I can say is we just never know where we are going to end up. We have no real control over anything. All we can do is make plans and have hope that things will be okay. For  the last two years  the one thing I had wanted so much to do was to ride my horse again. It wasn’t  a lofty goal really but one that seemed to be unattainable to me not long ago. I didn’t want to give up the hope that one day I would ride again…..but for a while it was iffy…

Two years ago I thought I would never be able to do many activities again let alone ride a horse. My only goal then was trying to find someone to fix the pain I was in. That was a battle unto itself but I did not want to give up- because to do so left me in a very dire situation. One that I could not accept.

June 2016 was a start of an intense pain drama that was caused by breast cancer treatments. The pain had been an issue since my surgery in October of 2013. I had sought help for it with no luck and then it really  reared its ugly head in May 2016 leaving me bedridden for much of the next year. It was hell trying to find the a doctor who would listen to me and not send me away with a shake of the head. They either had no idea what was wrong with me or they thought I was nuts. But finally I found a surgeon who listened.

Today, three surgeries later. I am not that woman stuck all day and night in bed anymore- but I still live in chronic pain. But the levels I am managing- and there may be more surgery in my future. I am left with a disabled arm that I cant use fully and overuse causes pain. Sometimes I don’t know what that overuse is. But I just try to dance with it- sometimes I am in the lead and sometimes the pain is.

I have been hell bent on doing more living- I have always been a physically active person and I missed the mental boost such activity gave me. So many things I could not do. Some because of the limits of my arm and some activities were contra-indicated by my surgeon- one being horse back riding. It was a total bummer to hear this but I temporarily shelved that disappointment and sought another activity .  I bought a kayak with pedals so I could go out in the bay near our beach house. The feeling of independence being on the water propelling myself was intense and important in my recovery. I bought a bike. I began to walk more. I can do limited exercises in the gym.  But I was really missing the one activity I was told not to do—ride my horse.

In the summer of 2017 I was still in enough pain that I was not sure I could ride and on enough drugs I was not sure I should ride. But one day that summer  on a whim Kevin and I tacked up my horse Harley . He accepted the saddle and bridle so well  that I decided to get on and have Kevin lead me around the dry lot. I knew the surgeon had not been keen on my riding but I wanted to be in the saddle. It was just a pony ride but it was the kick I needed – I set a firm goal – I would  ride my horse again. But there were still obstacles to overcome.

I didn’t think it would take another year before I was able to ride again. I had another surgery in November of 2017 to hopefully further reduce my pain. I would say the result have been pretty good. I am off opiates but still need nerve pain medications. . I have pain flares more often than I would like. But I am doing more. The surgery itself – which was fat grafting -had a longer than expected recovery time.

Every time I went to see my nerve surgeon – Dr. Williams- I would tell him that I wanted to ride my horse.  HIs concern was that my arm would be yanked forward if the horse pulled the reins forward suddenly- and this does happen. This can cause more damage to my arm. Also there is the risk of falling off but I think in my case the real concern was with the yanking of my arm. So I wanted to rectify that. How to keep that from happening. There had to be a way . Maybe I would ride one armed. I began to look into that as an option.

Then sometime this past spring my farrier came. I was telling her my plan to try ride again. I explained my concerns of riding with two arms and one getting yanked and I was also becoming nervous about not being strong enough to ride using only one arm (my horse is also neck reined) if my horse pulled suddenly. She told me to get a Daisy Rein. I had no idea what they were but it turns out they are used often for young riders. The rein hooks onto the saddle and also to the bridle and that keep the horse from pulling his head down. Maybe it would work for this old rider!

I saw my surgeon again in July and explained how much I wanted to ride and told him about the rein. He never did give me his blessing but he told me if I did ride I needed to send him photos after I was safely off.  So that to me was an ok to go ahead.

My plan was to move slowly into riding my horse Harley beginning in early August- but life threw us a loop as we suddenly  lost Harleys companion a- our beloved Arab mare -Airy to colic. It was a tough loss on all of us and I again shelved trying to ride. This time more for Harley than for me. I knew it was a stressful time for a horse when there are changes like that adding me riding him after such a long time off might add to the stress – and we wanted another companion for Harley so the focus shifted on that. It took some time but we now have Hank and Yukon here. Hank belongs to our neighbor and Yukon is our Guardian horse form a local rescue.

One  day a few weeks ago  I went out to the barn to feed the horses and our neighbor was bringing Hank back from a ride. I began to feel that envy. That yearning to ride my horse. I really felt it was now or never so I began to get Harley tacked up. It is a bit of a chore for me to get it on while trying to limit the use of my arm but I was able to do it with Kevins help.

Before long I told Kevin I wanted another pony ride. I have to use a step to mount now to get on- it allows me to not use my arm too much.  I got up and settled – feet in stirrups and I was holding both reins because we put the daisy rein on to give that a try too. He tolerated it well and best of all it worked! He couldn’t pull very far so no yanking of my arm.  After a bit, I asked Kevin to let me go and and I took a deep breathe in and let it out and off I went.  I maneuvered Harley around the dry lot for a while..at a walk.. nothing fast. He did very well – and we then called it a day. Best to end on a good note when working with a horse. And I was not ready to ride in the fields yet. But it didn’t take much time for me to be ready! So much for slow starts.

Since that day I have ridden twice out in the fields. The last time – this past Saturday- I was able to tack up on my own. I have learned to yank the saddle out of my locker with one arm and I can toss it up on his back with one arm too.  It was very freeing to be able to do this on my own.

I also can ride with one arm so I switch from using two hands on the reins to one. It turns out my arms are in a “safe” position so I don’t think I will get a pain flare if I am careful – but again it is that dance i mentioned above. That day I was in the lead. Dismounting is a bit of a challenge. I now lower the stirrup iron and dismount on the  right which is the opposite side we proper English riders are taught to do.

Obstacles aside I can’t begin to explain the mental effect being able to ride again gives me. It is something I have needed. It didn’t feel like it had been two years since I had ridden solo. It was as if no time went by at all. I felt right at home in the saddle. I am so lucky to have the horse that I have. Some horses may have been too much for me after not being ridden for so long. Harley is a true champ. We have a bond.

My goal is to ride twice a week for now. I will have to be flexible on this as well as I live my life around things we have planned – social visits, traveling, and doctors visits. So I often curb any physical exercise for a couple days prior to doing these things because I don’t want to have a flare up of pain which may require me to cancel the plans.

But that is life as I live it now. I accept it. You just never know where you will end up…right now for me I ended up back in the saddle. How lucky I am….

….And Dr Williams has been sent a photo..with more to come… 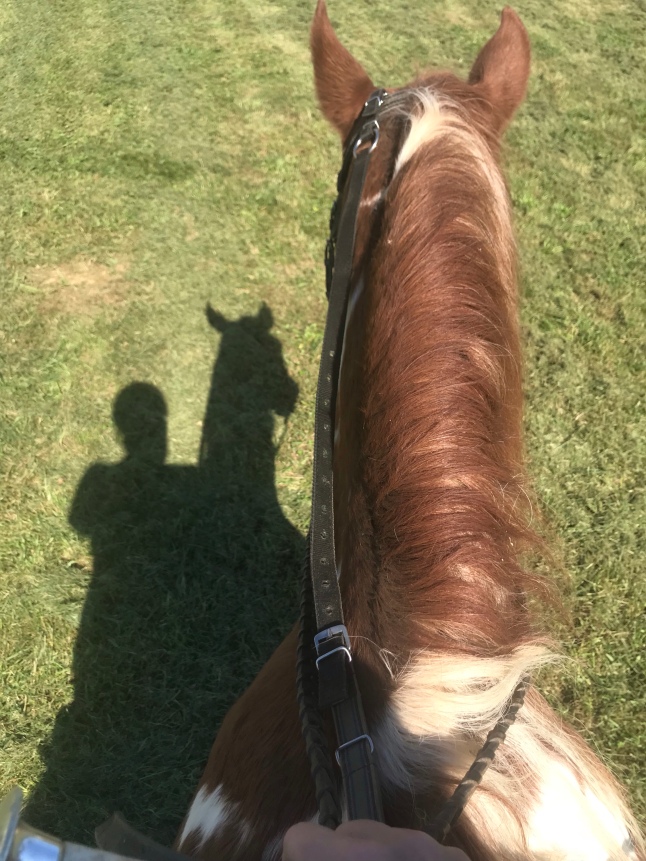 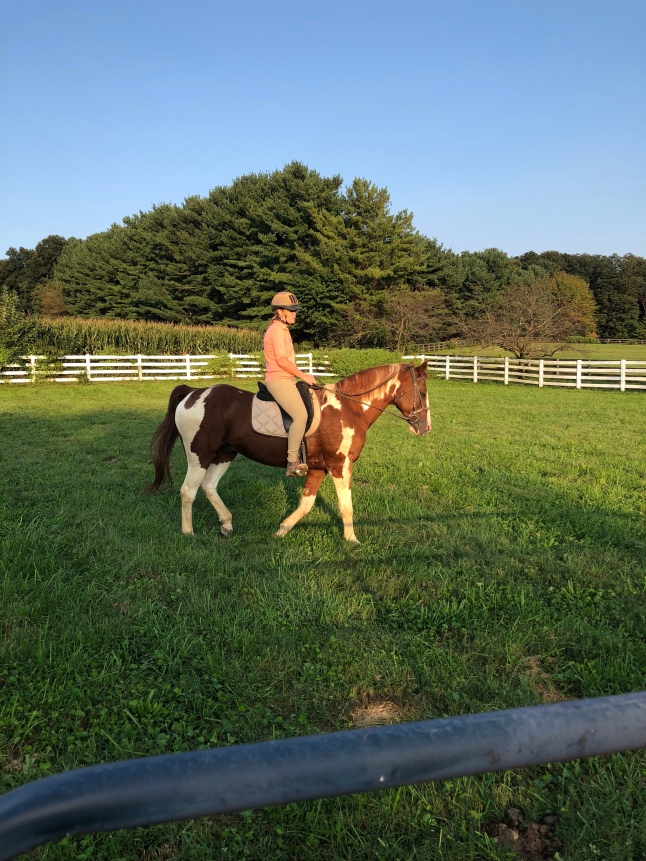