The other day I took this picture: 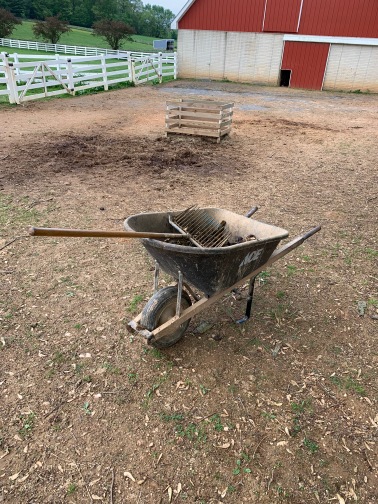 When I see this photo I see accomplishment!

I was trying to mark a milestone.  I had just accomplished the feat of taking the wheelbarrow out of the barn and rolling it along as I scooped up horse manure. This may sound super boring and probably an unsavory job to many people but it is a job that I happen to like – you can get a lot of thinking done when you scoop poop- and you often have the company of one or more farm animals. I have been unable to do this job for quite a while because of my chronic nerve pain in my arm and back.  So I was having a “look at me ” moment.  I thought if the nerve pain didn’t flare up too much the next day I would post this photo and brag on this accomplishment.

But then this happened! 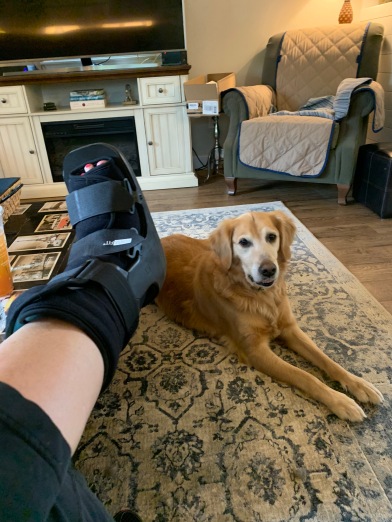 Do you like the dog as prop in the photo?

This must have happened because I was so full of myself from picking up manure! I was in the chicken yard grabbing some items I left in there and I turned caught my foot on the hose as I was stepping forward.  It was one of those falls where you think you have caught yourself and you expect to be upright but you end up on the ground. I landed on my side and my rear – and on my non- nerve damaged side. Thankfully.  I had to make a nice turn to end up that way. I do think one of my guardian angels helped that move because I don’t know how I landed like that.

On the ground my first thoughts were “did I land on a chicken?” (I didn’t – they all ran far away – chickens!) and “ouch my ankle” and then “this is not going to sideline me”. NO No no!!  The next thought was me wondering if my cowboy neighbor who was out feeding his equines saw me fall. (Kevin was nearby but on a loud tractor mowing a field).  I did not want my cowboy neighbor to see me on the ground! It is bad enough that I need he and his wife’s help for all kinds of things (they are young and able!) but I didn’t want him to have to come ask if I needed help getting up off the ground- I would feel ancient.

So I took a deep breath- assessed the damage and hauled myself up off the ground.  My left ankle was tender. But I was ok…I was not in that much pain–lie lie- I was. But I went over to finish some things for the horses including some brushing all the while hoping they didn’t knock me over!  I just could not fathom that something was going to take me down for the count. But I knew I needed to assess the damage to my ankle – both ankles hurt but the left seemed to be getting worse by the minute. So I went into the gym part of our barn and I took off my boot. I could see where I twisted it. Not too swollen.  Good.

I had twisted this ankle before years ago leading a horse down a hill.  But this fall was worse- it hurt much more! I was a bit worried but I waited for Kevin to get off the tractor so he could take a look. He thought it was a sprain -but because it was getting more painful pretty fast we opted to go to the urgent care for an x-ray.  It didn’t take long and they were fairly certain I had no break – but gave me the films with instructions to see primary or ortho as needed – and they locked me into a boot that felt like a ski boot and off I went.

I will admit to moments of self pity and negativity.  I am just beginning to get back in shape and being able to do more things and I did not want this to slow the progress. And I was back needing someone to help me – poor Kevin has had enough.  But I decided not to make it bigger than it was. It is just a sprained ankle. It will take time to heal but maybe I can work around it some and keep moving some.

I got home and broke out of that boot and iced my ankle all night.  I woke up with pain the following day but it seemed less than the day before which surprised me but gave me some encouragement.  I still felt like I needed the boot because I did want to try do something constructive with my Saturday. We always have a list miles long of things that need to get done. I was in the middle of spray painting a wrought iron table I picked up for $50. I wanted to complete that project. So I put on the boot and Kevin covered it with a trash bag and I got painting.  I was able to stand just fine and after a while I became so involved in my work that I forgot I had a sprain (and nerve pain for that matter!).

Today I woke with less ankle pain again. I am paying for the spray painting with some nerve pain in my arm and back but I expected that.  I still can’t move my ankle certain ways. I feel like the foot needs support.  I had taken a knee brace and somehow made a foot brace out of it and that was providing support. The boot seemed like overkill. Today I went to the drugstore and grabbed a couple ankle compression bandages and an ACE wrap. I will keep some form of protection and compression on for a while. I think this is going to heal sooner than later if I can keep from aggravating it. I can see how I will still be able to do most things. I just need to elevate it some each day.

Well it is funny how one minute I was so excited about picking up manure and the next I was flat on my butt with a sprained ankle.  That’s life . You just have to take your joy moments and appreciate them. I will be back picking up horse manure again soon enough.  I am grateful my PT is going well and  that I am doing things I haven’t done in so long. I have hope!