If you have read my past blog posts you know I have dealt with four surgeries since fall of 2016 to deal with the pain I ended up with after breast cancer treatments.  My last surgery in Feb of this year was a grafting surgery and it has involved a long recovery mixed with many months of PT.

So here I am almost 6 months out and I have been working hard in PT to get this arm moving. I have found an incredible PT team that is well versed in my issues and have been specially trained to deal with them. The program they follow is called ReVital and it is a Rehabilitation program for cancer patients.  It encompasses many forms of rehab- not only PT. Though some cancer centers already have rehabilitation in house some don’t and these participants are highly trained to deal with many issues during cancer treatments and well after.

There are so many facets to cancer- – fighting it being one – recovery being another – and  the during treatment and post cancer issues like pain, depression, fatigue, disability etc being another. For so long this latter facet has poorly addressed. But I am seeing and increase in available resources including rehab and also more written about post cancer pain- this implies that more cancer doctors and  pain management centers are becoming more aware of the issues- and the reality of the problem being acknowledged. In addition the cancer doctors themselves are also learning that their patients need to be fully served when they are facing cancer treatments and they are beginning to understand the potential residual effects that these cancer treatments can impose on patients- sometimes symptoms showing up years after treatments end. So now we see more of these docs being proactive in having the ability to refer a patient for help when they begin to complain about their issues.

This is a big deal for many of us who have had to go to plead their cases to doctors who couldn’t understand why we hurt so badly after our treatments. We weren’t supposed to complain. We were supposed to be happy to be alive. And we are- but we need to be heard and believed when we say we hurt after our cancer treatments are over.

I made a mistake after my treatments ended I should have gone right to PT- I did go when I had an odd and very uncomfortable nerve pain show up basically over night.about three months later. Would my pain issue have not occurred if I had don PT before that nerve pain reared it’s ugly head? I don’t know. But I thought when I had ongoing issues that my docs would have had my back. But after PT the issues persisted  on and on and my cancer surgeon scratched her head and kind of pushed me off into the unknown to try to find someone to help me figure it out. I went to numerous – like a lot- of doctors over the following couple years and I got nowhere.

My world came crashing in midway through 2016 when my pain hit an all-time high and I was bedridden. Many doctor doors closed on me then, too many. I felt more alone then I had ever been. I was at an all-time mental low. Then finally when I yet again went to plead with my cancer surgeon for some help and she treated me literally like I had a mental issue and not a pain issue that was the last time I saw her- and I went home despondent.  I was in a very bad place. And it took prayer and tenacity to keep going and finally I found doctors who wanted to help me. Who weren’t afraid to try.

Nobody should have to go through that!  Before cancer I didn’t have the pain – after I did.  Radiation damage is now recognized and talked about in the cancer community and the fact that it can pop up soon after treatment or years later is being discussed more in-depth.  Chemo causes its own long term effects.  We are warned of some of this before treatments begin. Like deer in headlights we are frozen and see the treatments as the only way to get safely off that awful road.

In my hindsight world I would have not gotten radiation after my lumpectomy. I was early stage. Did I really need it? Maybe I would have gotten recurrence in that breast- maybe not. But the pain I have suffered since my diagnosis – 6 years ago now- has been very very hard. And there have been times I had so many dark thoughts. Looking at it in the rearview  -I think I would avoid radiation and take my higher risk of recurrence (because it exists anyway) to avoid the pain. But that is what I have learned and sadly not what I did.

It may be that we who suffer severe pain from our treatments might never find a life that is actually pain free. But what we do need is the support of our doctors when we find ourselves in this very difficult spot. We need medical professionals who can help try to get us to the best version of feeling better that is possible.

As for me – I have made some good progress since this last surgery.  I have been in PT since mid-April and I still have pain but my arm range of motion (ROM) is vastly improved. We have hit a point in trying to improve my ROM where I am getting more pain flares.  I won’t go into all the medical reasons why but they PTs seem to think this is ok. For me it is easy to get nervous and discouraged. It is so easy for me to want to NOT move my arm – or do my exercises – but I force myself.  One thing I seem to do on a regular basis is to overdo things and get pain flares. Many times I don’t even know what I did to flare – that is frustrating.

But I move forward in fits and starts.  We joined a health club with a pool because I have a rekindled love of the water. I was able to get into the ocean and past the breaks in the surf. I did get pummeled by a wave once – that brought back memories. I have kayaked using the paddle sort of- I suck at it – I am very glad to have peddles at this juncture. I have been in the gym doing light workouts and I have ridden my horse. But I have also had a number of pain flares that side-lined me too. There is no straight path and I really still have no idea where I might wind up and I don’t think my forty PT visits my insurance allots is going to cover what I need. So I hope they will extend me.  That can be a battle too.  I have learned not to expect smooth sailing. But I am ever so pleased when something does go smoothly.

Before cancer I was in great shape.  I was strong. I looked fit. And now… well my version of strong has changed- but I have goals – but they have no end dates- I just keep extending them.  I am trying not to be so vain too. I am hard on myself for gaining weight, for aging…I need to give myself a break. I am trying. Trying should be my middle name. I am always trying- even when I don’t think I can move my feet out of the concrete- somehow I just keep trying. …I don’t know where I will end up but at least I keep trying- and that is not a bad thing. 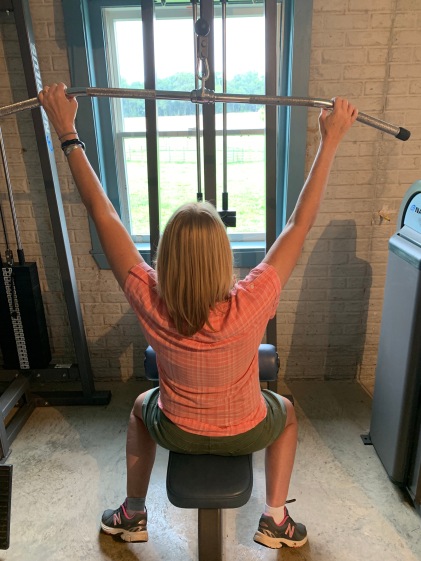 This is in early July. I have even more ROM on the right side now. This was an exercise that did flare me up. When I began PT I was at about half this range.