We are on Sweeney South East Tour 2020. (SSET 2020) We headed south for a 14 day action packed work/vacation. Hubby gets to work and I get to vacay!

After driving 7 hours from Maryland to South Carolina we walked into our AirBNB in Myrtle Beach SC  around 7pm and I was hit with the overwhelming smell of plug-in air fresheners.  In my head I was saying oh crap, crap – this could be a problem.  I have an issue with perfumes, strong cleaners, smoke etc. It is a definite chemical sensitivity but it has improved over the last few years. Before I would have done an immediate about face once I smelled the air freshener- but I thought I would give the place a try.

It was a small place- very small. One tiny bedroom, tiny sitting area and bath.  It had three plug-ins (that seemed like too much for such a tiny place- what smells that bad they need to cover it up?) that I could find- I unplugged them all. I opened the windows. We went for a walk around the block. I kept thinking it will be ok- I can do two nights here. But when we got back inside and settled to watch TV , I was trying so hard to be a good sport but I was mouth breathing and I was tasting the smell…I could not get away from it.

I did not want to spend the extra money- airbnb was a no refund deal -but I was not going to be able to deal with the smell. I began to covertly look for a hotel –  on my phones Booking.com app- that might take us and our dog Rudy.  I found a few possibilities.and then I turned to Kevin and told him that this place was a fail and we needed to try to find another place.  He agreed – love him. He then walked to nearby hotels  to check if they would take us because the move would be so easy -no luck – some places are just too picky about the dogs size – discrimination.  Others just did not take dogs at all. But I was able to book a room online not too far away – just not as near the ocean. I just wanted to get there and get settled.

I packed up what little we had unpacked. Rudy – my dog- was probably confused.  What were these humans doing? But he’s a Golden Retriever so he’s always game for anything. We got back in the car and headed to the hotel. We were very tired at this point and probably trying not to snap at each other – so it probably didn’t help my snappy mood when we pulled into the hotels parking lot – Kevin got out of the car and went to check-in- and right then a police car pulls in to the lot with lights flashing and they approached some guy in a red winter coat with his hood on  -and then they frisked him and then began questioning him and another cop was talking to some other person in another part of l the lot.  I began to sing “bad boys bad boys, whatchya gonna do if they come for you” –  (and it turns out this wouldn’t be my last front row seat to police altercations –  we would witness a search and seizure at a GA rest stop days later- the excitement of this trip abounds!).

So as I said Kevin had gone in to check us in as I watched the drama with the cops unfold. I even unrolled my window to try to hear what was going on-  I know- I am so nosey! I really wanted to sing “Bad boys”  out the window but that wan’t in good form so I refrained.  Then Kevin came out and I thought he would hand me the key to the room we reserved ten minutes before (by this time I was not feeling super great about the hotel – but the choices were limited.) Instead Kevin said they are booked up. What? I booked it online…but the hotel blamed it on booking.com glitch and well we had no room, and their sister hotel  nearby had a poundage limit on dogs so no go. Geez. I just want to say that little dogs can do some damage too and they tend to be more barky, D – for dog discrimination!

Oh I was getting pretty freaking pissy. I decided to call the hotel chain 800 number bc I had called them when I was booking the trip – as we are booked to stay in one of these hotels in Florida – and I had been told they had no dog weight limits. So I was complaining.

But I needn’t have worried….

The nice lady on the other end of the 800 number got us a room- it took her like way too long to arrange it and we did have to drive a bit more north of where we began – but she booked it. I was so happy that I agreed to be transferred to someone after the call so I could get $100 off my next stay….I agreed to be transferred but promptly hung when she did so…I was in NO mood for a sales pitch. But super thankful for the room.

So we finally get to THE ROOM. I am tired. Rudy is stoked bc he’s Rudy and always is stoked and Kevin is stoked because he knows my bitchy self can relax and go to bed —and we opened the door and in I walked and there was the bed -yay! and then as I walked further into the room this little bonus is sitting right in the middle of the room…. 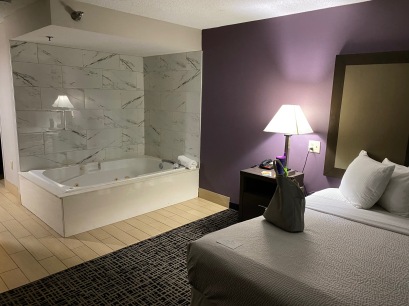 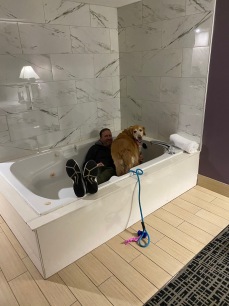